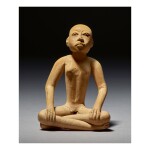 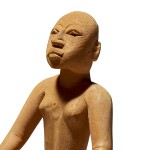 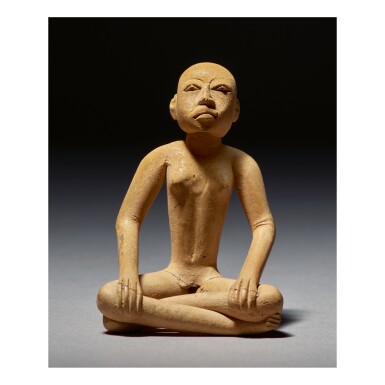 Appears to be in excellent condition, no visible repairs to the naked eye.

This exquisite miniature figure from Panuco is one of a group of six which Gillett Griffin notes "appear to be depictions of the same person […] modeled by the same master hand". (Griffin in Goldstein, ed., Ceremonial Sculpture of Veracruz, Brookville, 1987, p. 20). Other examples from this tiny corpus are in the Nelson-Atkins Museum of Art, Kansas City (inv. no. 65-3/3), and the Cleveland Museum of Art (inv. no. 1966.17).

With the deftest of touches, the master sculptor has imbued this delicate sculpture with life. The pose is at once serene and attentive. The head, slightly tilted, looks out with an expression which is languid yet intent. The long, lithe arms are outstretched, with the fingers resting gently on the legs.

The purpose of this figure is elusive. We may wonder if it was perhaps intended to "help or reassure the deceased in his long journey into the strange world of the dead" (ibid., p. 21), but this question remains unanswered. What we may appreciate and understand on looking at this object is the beauty and tenderness with which a great artist has exalted the dignity of the human figure.