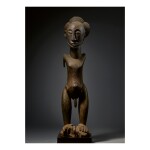 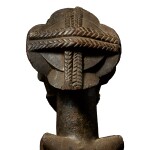 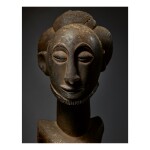 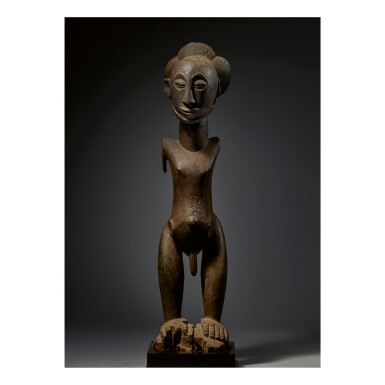 Acquired by the present owner at the above auction

In the plains of the eastern Congo, the Hemba people live in the land which extends to the north and south of the Luika River, bounded to the west by the Lualaba, the greatest head-stream of the Congo River. Their villages were "named for titular heads, well-remembered ancestors, or particular lineages", and were "autonomous entities [within] which individuals identified themselves primarily in relation to their extended families and clans." (Blakely, cited in LaGamma, Heroic Africans, New York, 2012, p. 225).

Among the Hemba, the family relationship transcended death in an eternal bond. Ancestors continued to exist in a realm distinct from that of the living, but accessible nevertheless, and their spirits watched over the lives of living. The sculptures, known as lusingiti (sing. singiti), which the Hemba made to honor these ancestral bonds, are among the greatest forms of African sculpture. Only within the last forty years, however, primarily through the work of François Neyt and Louis de Strycker, has Hemba sculpture been identified as an original style distinct from that of the neighboring Luba people, with whose iconic sculpture it shares many qualities, not least a deeply meditative appearance. However, while Luba sculpture represents the beauty of the female form, Hemba statuary almost invariably celebrates the power of the male founders of great lineages, with each singiti a posthumous commemorative portrait of the sovereign of a particular Hemba chiefdom. François Neyt calls these sculptures "irrefutable genealogical markers." (Neyt, La grande statuaire Hemba du Zaïre, 1977, p. 479).

In his monograph La grande statuaire Hemba du Zaïre, Neyt provides a morphological analysis of Hemba sculpture and distinguishes eleven "stylistic centers." This statue belongs to the first group in his classification – the Niembo style of the southern Hemba country – which has been described as "the most accomplished and classical" of all Hemba styles. (de Grunne, ed., Mains des maîtres/Masterhands, 2001, p. 182). Like all lusingiti, this sculpture was not conceived as a portrait in a literal sense. LaGamma notes that although these sculptures were intended to represent "specific former leaders in a relatively naturalistic idiom, the representations themselves do not literally reproduce those individuals' specific physiognomies." (LaGamma, ibid., p. 266). Instead the ancestor was represented through an idealized rendition of the qualities which the Hemba valued in their leaders, with the ancestor's "likeness" revealed by his deeds.

Although the Hemba artist would follow certain accepted canons of representation, each sculpture is highly individualized, with the head, and particularly the face, the source of distinction, rather than the posture or body. The imperious, orb-like head is a magnificent illustration of the care which Hemba artists devoted to the head as the site of intellect; Louis de Strycker has also suggested that the large heads of Hemba statues serve to emphasize the importance of the skull of the ancestor, which would have been conserved in a special enclosure. (de Strycker, "La Statuaire Hemba du culte des ancêtres. Eléments de diférenciation des Hemba par rapport aux Luba et Luba-Hemba", Thesis, Brussels, 1974-1975, p. 123).

In this statue, the head is particularly commanding due its size and elaborate coiffure, which expands into four open lobes held back with an ornamented diadem. Two finely decorated horizontal braids overlap with two vertical braids atop a delicately upward slanting plane. The braids have a functional purpose in protecting a receptacle where the clan chief stored seeds to be planted for the next harvest. The limit of the facial plane is defined by the arched brows, below which the rounded eyesockets delicately indicate the line of the cheekbones and underline the quiet yet intense gaze of the eyes, half closed under languid eyelids. The limpid gaze conveys an air of deep contemplation which we can associate with the Hemba concept of ubatizha, the visual acquisition of knowledge. The Hemba privileged the gaze above all other senses and held that through long and unhurried scrutiny one could acquire the most profound knowledge of a person, object, or event. The slight bowing of the head, created by the parallel lines of the forehead and the jaw, furthers the impression of a state of tranquil contemplation and recalls certain representations of bodhisattvas which, like this honored Hemba ancestor, help and guide those in the phenomenal world.