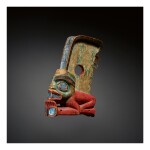 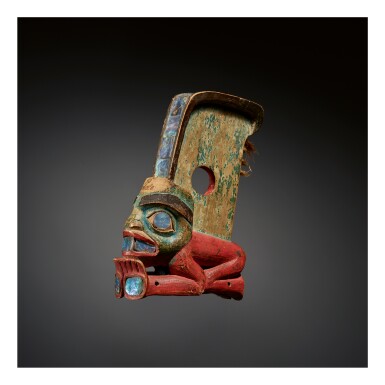 Property of a Canadian Private Collection

The forehead of the figure inscribed in black ink: "95 Whale"

Lynden Library, Lynden, Washington, bequeathed by the above in 1937

Lynden Pioneer Museum, Lynden, Washington, donated by the above in 1976

Canadian Private Collection, acquired at the above auction

Among the Tlingit, crest hats are the most highly esteemed and valued type of ceremonial objects. Crest hats symbolize the mythological origins and ancient history of the clan­, the most important and central division within Tlingit social structure. Clan hats bear important roles in such lifecycle events such as potlaches, representing the spirits of clan ancestors who also wore and used these objects back through the generations. Clan crest emblems are painted and carved in various forms to decorate a hat and identify its clan affiliation. The hats are either woven of spruce-roots or made from wood. The images embody the strength and power of the accumulated spirits of all previous clan members, and the respect and status associated with these hats is based on this ancient timeline of history and memory.

This particular finial, in the form of a killer whale's dorsal fin, is beautifully composed and carved, and is highly embellished with abalone shell inlays and numerous locks of hair along the back edge. The small human figure at the base of the dorsal fin possibly represents the mythological personage known as Natsilane, who is credited with the creation of killer whales. The human image is carved in a distinctly Tlingit style, and is comparable in sculptural form to masks and maskettes from Tlingit carvers of the first half of the nineteenth century. The large round eyes with short, wide-open eyelids are typical of early Tlingit style, as is the extensive use of blue-green natural pigment in design patterns on the face of the image and the inner surface of the dorsal fin itself. This pigment is known as celadonite, vivianite and/or glauconite, which is a soft iron ore that was found in rare, isolated locations on the northern coast and widely traded between northern peoples. All the carving of this dorsal finial is precise and well-done, and the various lines of the composition are pleasing and harmonious, blending perfectly with the lines of the human figure's head and body. Even without knowing the specific hat it was made to adorn, the characteristics of the finial suggest that the hat was also similarly refined and beautifully composed. The finial, its sculpture and pigmentation, all indicate that the carving was most likely created between about 1830 and 1860.