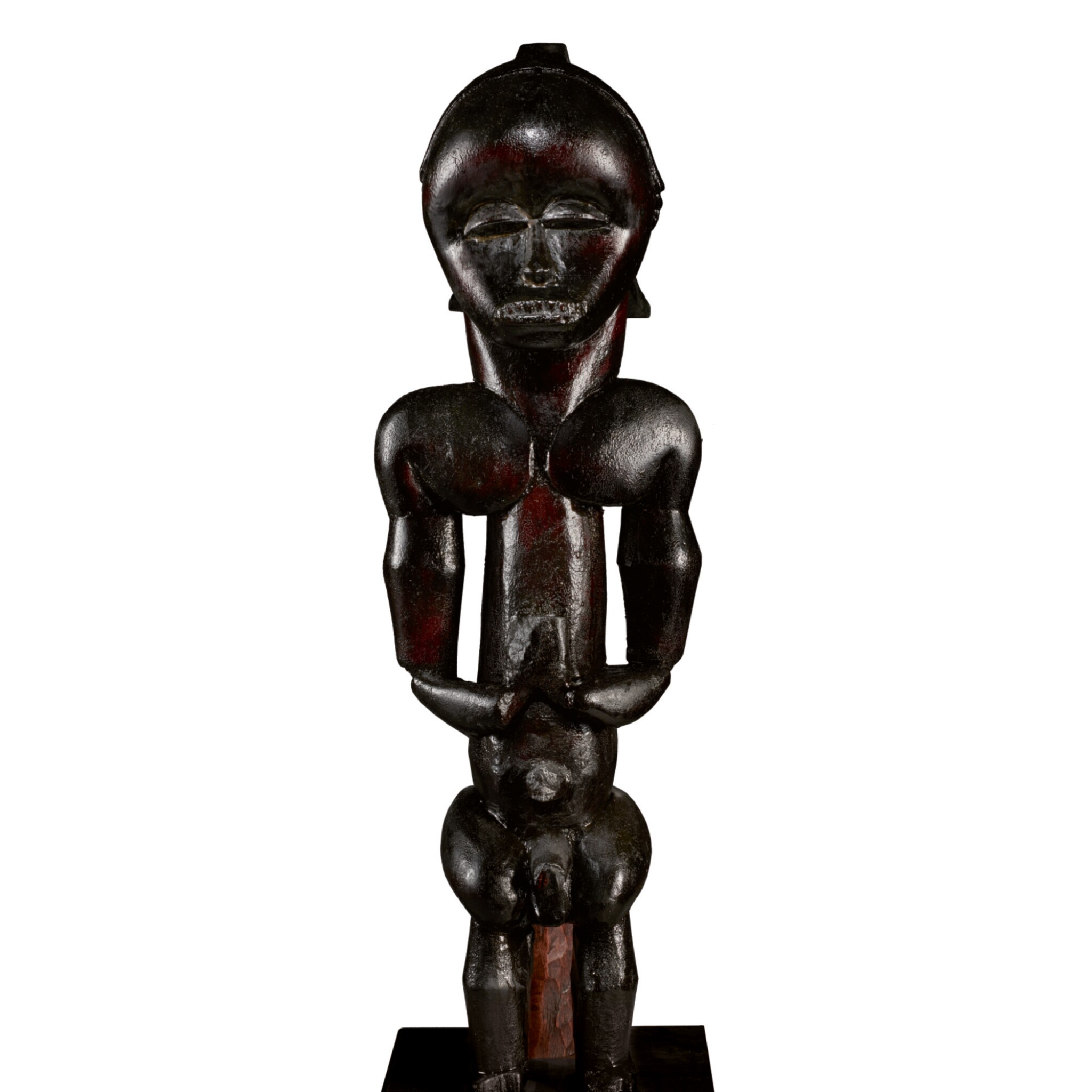 Harold Kaye, Great Neck, New York, acquired from the above, probably in the 1950s

American Private Collection, acquired from the above by the late 1970s

Of magisterial expression, powerful physiognomy, and rigorous geometry, this image of an ancestor exudes the quiet strength and introspective stillness for which Fang art is so beloved. Liquid oil applied in its original ritual context glistens on the surface, and a droplet lingers on the chin. Delicately opened eyes lend softness while the broad powerful shoulders prove the strength of the dynastic leader.

The emergence of this previously unpublished statue is a rare and exciting event. From the collection of the American-born British sculptor Sir Jacob Epstein, it came to the United States in the 1950s when it was acquired from Epstein by the American collector Harold Kaye. Therefore unlike the famed group of Fang masterpieces in Epstein's collection which were dispersed after the artist's death in 1959, it has been virtually unseen until now. It was acquired from Kaye by Alphonse Jax in 1972, and by the family of the present American owners in the late 1970s.

Jacob Epstein considered that "the most remarkable exemplars of African art [are] pieces created by highly individual artists, whose vision and technique were their own" (Haskell, The Sculptor Speaks, London, 1931, p. 90). Like his contemporaries in France, Epstein had received the invigorating shock of discovery in his encounter with classical African art. As a sculptor, the implications were especially important for Epstein, and it is fitting that he would become the obsessive guardian of Fang art. In his autobiography, Epstein stated: "There is a profound and genuine reason for a sculptor’s interest in African art, for new methods and problems are presented in it different from those of European Art. African work opens up to us a world hitherto unknown, and exhibits characteristics that are far removed from our traditional European rendering of form in Greek, in Gothic, or in Renaissance traditions." (Epstein: An Autobiography, London, 1955, p. 188)

Such was the fame of Epstein’s Fang collection that some of its jewels became known by honorific colloquial titles: "The Great Bieri", today the centerpiece of the Metropolitan Museum of Art’s collection of African Art, and "The Black Venus", one of the jewels from the collection of the Fondation Dapper in Paris.

Since Epstein’s lifetime, Fang sculpture has risen in the corpus of world art, thanks to the work of scholars such as Louis Perrois and canon-defining museum exhibitions such as Eternal Ancestors: the Art of the Central African Reliquary, held at the Metropolitan Museum of Art in 2008, and Les forêts natales: Arts d’Afrique équatoriale atlantique, held at the musée du quai Branly – Jacques Chirac in 2017-2018. Today Fang ancestor statuary rightfully occupies a special place of honor in the field of African Art and indeed of all of world sculpture. For a virtually unknown Fang sculpture of this scale and quality, glistening with oil, to appear on the market today is extraordinary.

The superb sculptural quality of the present figure makes this discovery especially exhilarating. The massive scale of the head is defined in alternating convex and concave forms, exquisitely-carved, and a matrix of geometric masses defines the arms and torso, the biceps separated from the torso in virtuoso openwork. This vigilant muscle-bound male ancestor exudes physical strength, introspective gravity, and great beauty.

In the following essay, Louis Perrois discusses the attribution, function, and characteristics of this important newly-unveiled sculpture.

This Fang Statue was once part of a byeri ritual ensemble which included also a reliquary vessel made of bark, containing the skulls of dynastic ancestors. Previously in the collection of the British-American sculptor Sir Jacob Epstein, who likely acquired it in the 1920s, the figure is a remarkable specimen showcasing the robust volumes of the ancestral statuary of the Betsi or Mekè Fang of Northern Gabon, and is probably from the region of Monts de Cristal, near Rio Muni (now Equatorial Guinea), or the Komo Valley. By virtue of its extremely refined sculptural quality and deep accumulated patina and wear from ritual use, this fine and previously unpublished work certainly dates from the 19th century.

A solidly-proportioned body supports a head of remarkable volume, representing one-third of the total height of the sculpture, equivalent to the size of the lower limbs. Projecting symmetrically from the central axis of the body are the profiles of rigorously defined and highly stylized muscular arms, which emerge from massive shoulders.

The slightly rounded abdomen is punctuated by a cylindrical navel and legs in seated pose, with the thighs described in tapering volumes and calves made of vertically stacked cones. The sculpture is stylistically characteristic of classical sculptural corpus of the Southern peoples of the Fang group, usually grouped under the name "Southern Fang" (including Betsi, Meke, Okak, and Mvaï).

The statue is of a type called an eyema byeri ("image of the ancestor"), intended to symbolically evoke the ancestors for use in important clan rites and initiations. In this case the figure represents a male ancestor, likely the head of his lineage. The function of the sculpture was to magically protect the relics of important deceased clan leaders, and to honor them in order to improve the daily life of the devoted, especially with regard to wealth, and to female fertility (see Perrois, Fang, Milan, 2006, p. 25). It was regularly anointed with a sacred ointment, red in color, called ba, which consisted of powdered Padauk wood (mbel) and palm oil. The long period of repeated applications of this material has resulted in a fine dark resinous patina. Occasionally, such statues were used as marionettes during liturgical ceremonies, enacting a symbolic resurrection of the ancestor.

The head is carved in a deeply expressive form of grand classicism. Beneath the perfectly shaped and highly polished quarter-spherical forehead is a concave heart-shaped face of large arching eyebrows centered upon a short straight nose. The large mouth projects forward into lips which just part to reveal pointed teeth. The ears are positioned far behind the cheeks and temples and are in a stylized comma-shape. The eyes, made up of broad, full almond-shaped lids, exude an enigmatic expression.

A raised axial crest surmounts the top of the head above the ears, bordered by a band from ear-to ear. Enveloping the cranium, this crest falls into a broad "duck-tail" form above the neck. The form of the coiffure exactly mirrors the actual wig-like headdresses (nlo-ô-ngo) worn by the traditional Fang of the nineteenth century. A transverse hole in the crest was used to fix a large tuft of feathers from an eagle or turaco, now lost.

This work is part of a corpus of objects which were brought to the West in the late nineteenth century and before the First World War, some of which were dispersed in artistic and intellectual circles, in Paris in particular. These were thanks to the interest of gallerists such as Joseph Brummer, who came from Hungary in 1909, and the young Paul Guillaume, who publicized them at exhibitions in his Parisian gallery and at early exhibitions in New York (see Biro, Fabriquer le regard. Marchands, réseaux et objets d’art africains à l’aube du XXème siècle, Paris, 2018, p. 195 et. seq.)

Several related sculptures of early date were in the collection of Paul Guillaume, including the beautiful statue reported in the collection of Roland Tual, published in 1929 (Guillaume, La Sculpture nègre primitive, Paris, 1929, fig. 28). One finds the same type of head, with a large forehead and almond-shaped eyes, squinted eyelids, and powerful muscular shoulders.

Other examples kept in Paul Guillaume’s collection until his death in 1934 provide close comparison in style and quality. In the auction catalogue of the sale in which Guillaume’s collection was dispersed at Hotel Drouot, Paris, November 9, 1965, the Fang byeri listed as lot 152 shows a similarly voluminous head, "duck-tail" coiffure, and curving shoulders. As was often the case, the artist has taken the time to carve the back of the figure with a long vertebral groove from neck to buttocks.

This statue, previously in the collection of Sir Jacob Epstein, where it rubbed elbows in the 1930s on the fireplace mantle or in an etagere with many of the most famous Fang sculptures in the world, is itself an exceptional work. Distinguished by the majesty of its subject, its massive head with delicately resolved coiffure on the reverse, the heavily lidded face with its ferocious projecting mouth and pointed teeth, muscular shoulders and stylized arms.

It was in 1847, near the current location of the small town of Kango in the Estuaire Province of Gabon, that the lieutenant of vessel Méquet travelling up the Komo river came upon the Fang-Betsi people. He noted enthusiastically in his report at these people were of "imposing appearance and athletic size; no clothing conceals their beautiful forms." (Merlet, Le pays des trois estuaires, Libreville, 1990, p. 94) Some years later, in 1856, the Franco-American traveler Paul Du Chaillu remarked on the beautiful appearance of Fang of Mondah (now Rio Muni): "They seem to be the most remarkable people I have ever seen in this remote part of Africa." (ibid.). One can perhaps draw a correspondence between these eulogistic remarks on the appearance of the grand Fang warriors of the nineteenth century and the sculptural beauty of their statuary, which has become iconic in the corpus of African art.