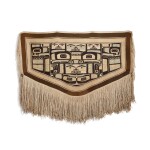 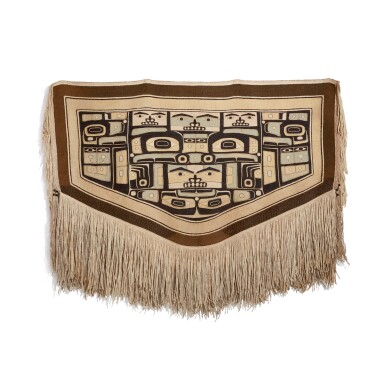 The weaving of "Chilkat" blankets originated with the Tsimshian people, specifically, with the women of the Nass River region known as the Nishga. Over time, this weaving tradition spread to the Tsimshian's neighbors on the Northwest Coast - the Haida and the Tlingit - who would become the most prolific weavers in the region. The name "Chilkat" derives from the prolific production of blankets by the Chilkat subgroup of the Tlingit (Jilḵáat Ḵwáan). In the Tlingit language, Chilkat blankets were called naaxiin, which roughly translates to "fringe about the body."

Prior to the introduction of commercial yarn to Northwest Coast communities by white settlers in the latter half of the 19th century, Chilkat blankets were woven from two-ply mountain goat wool and yellow cedar bark. Due to the size, artistic intricacy, and volume of raw materials required, the production of each blanket was an extremely laborious and time-intensive process. This process began with a male artist creating a painted pattern board of the blanket's design, which a female weaver transposed into textile form. The present lot contains characteristics of the classic Chilkat blanket type: its pentagonal outline resembles the façade of a house turned upside down; its thick black and yellow borders frame three clearly defined panels, with a primary design filling the central panel, flanked by two mirrored and symmetrical side panels. The forms present within each panel are highly geometric and symbolic, depicting animals and animal parts ubiquitous in Northwest Coast art and mythology, though a detailed interpretation of the meaning of each can be challenging, if not impossible.

Their exquisite beauty and the effort involved in the production process made Chilkat blankets the preserve of the Northwest Coast nobility, who possessed the wealth to make or to own a blanket. Blankets endowed their possessor with great prestige and were worn as ceremonial robes by both men and women. Often, the blankets were featured in dances, during which the rich colors, dynamic lines, and complex patterns came alive with a dancer's movements. At the conclusion of potlatches - elaborate ceremonies consisting of speeches, singing, feasting, and dancing to observe an important occasion or affirm social status - the host presented "the rights or privileges he claimed - such as the right to display a certain crest, to own a name, or to raise a totem pole. His ownership of these privileges required validation by the invited guests, who witnessed his presentation and who received payment from him in the form of gifts" (Samuel, The Chilkat Dancing Blanket, Norman, 1990, p. 34). To give a blanket away at a potlatch was an act of great largesse since none but the richest chiefs could afford to give away such valuable articles. Emmons notes, "during a potlatch, whole blankets may be presented to the most honored guest, but generally they were cut in strips and distributed; and such pieces are esteemed far beyond their intrinsic value (Emmons, The Chilkat Blanket, New York 1907, p. 345).