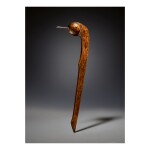 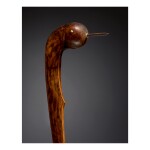 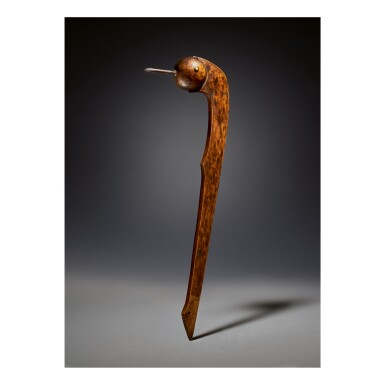 William Wildschut, Billings, acquired from the above in November 1922

Stella Foote, Billings, acquired from the above in 1931

John W. Painter, Cincinnati, acquired from the above in 1988

Brant Mackley, Hummelstown, Pennsylvania, acquired at the above auction

Ball headed clubs, along with gunstock clubs, are the most widely distributed style of clubs in Native North America. Ball headed clubs were carved from a single piece of hard wood, such as maple, with a long, relatively flat handle, bent at a right angle on one end. A burl, or carved ball-shape was at the end of the short arm. The clubs were extremely well balanced and designed to inflict a devastating blow to one’s adversary. In some instances, a metal spike was mounted into the ball to create additional damage. While most ball headed clubs were undecorated, some were adorned with incised designs on the handle and occasionally brass tacks were also occasionally added. In some instances, the clubs are carved to represent or imply that a bird or other animal is holding the ball in its open mouth. Additionally, there are rare examples with effigy figures, thought to represent otters, carved along the top of the arm.

Undoubtedly, ball headed clubs pre-date European contact and their use as a weapon continued well into the nineteenth century until such time that their efficacy was reduced because of the widespread use of firearms. These clubs were collected as early as the 17th century and there are numerous examples in European museums.

Ball headed clubs were made and used from the mid-Atlantic region through the Great Lakes and westward to the edge of the Plains. There are few, if any, characteristics that indicate individual tribal styles and most ball headed clubs in museums and private collections are simply identified as Northeast or Great Lakes. In the mid-Atlantic region ball headed clubs have been attributed to the Delaware and the Susquehanna. In the eastern Great Lakes area many are identified as Iroquois or Huron. In the central Great Lakes area some are attributed to the Odawa while in the western Great Lakes the most frequent tribal attribution is either Ojibwe (Chippewa) or Eastern Sioux. Other tribal attributions for ball headed clubs include Menominee, Winnebago, Otoe, Osage, and Lakota. The dates range from approximately the mid-17th century through the mid-19th century.

While this outstanding ball headed club exudes a powerful and menacing presence because of its intended use, it is also a sublime work of art. The graceful form is matched by the smooth surface and natural color of the maple. The base of the handle ends diagonally, which not only emphasizes the handle’s length and gracefulness but also creates an impression of a horse’s hoof. Nearly two thirds of the way up on the inside of the gradually expanding handle there is small point. Although there is no known symbolism for this feature it is present on many ball headed clubs. The curve of the right angle on this club is elegant and proportionate to the overall form. The short arm is carved with ridges at the top and bottom that seem to embrace the ball as if being held in a mouth. The ball itself has a single brass tack on each side that may represent eyes with the long metal spike possibly meant to symbolize the long beak of a bird. At one time, there was a leather thong, wrapped with porcupine quills, attached to the top of the ridge above the ball. There is also a series of incised lines at the base of the handle that may represent tally marks.

This club has a long and well-documented provenance that begins more than 100 years ago, first coming to light in the possession of the English dealer, W. O. Oldman. This may indicate that the club could have been collected prior to 1800 since the English were the dominant power in both the United States and Canada at that time.

Since the majority of ball headed clubs with metal spikes are identified as being from the western Great Lakes area this club is probably either from the Eastern Sioux or Ojibwe. The Ojibwe tribal identification is more likely because of the early date and because the Ojibwe live in both the United States and Canada which corresponds to the club being discovered in England.

This tribal attribution and date corresponds with the opinion of Dr Ted Brasser who states: “This is a really nice club, most probably from the Wisconsin region, 18th century.” (personal communication).