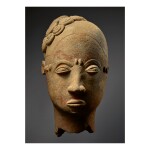 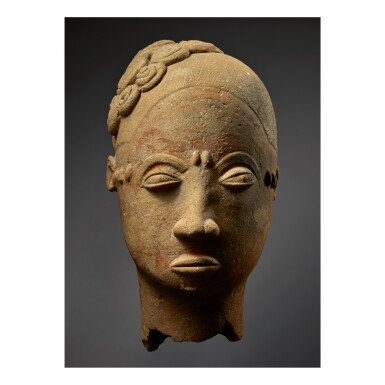 As early as 1602, Pieter de Marees published detailed observations of his travels on the west coast of Africa. One such observation noted the funerary rituals of Akan "Kings": "All his possessions, such as his weapons and clothes, are buried with him and all his Nobles who used to serve him are modelled from life in earth, painted and put in a row all around the Grave, side by side." (De Marees, Description and Historical Account of the Gold Kingdom of Guinea (1602) (Fontes Historiae Africanae), Oxford, 1987, pp. 184-185). This terracotta portrait head likely relates to this tradition. A graceful and subtle sculpture which combines an idealized vision of beauty with individuated traits, it is fitting that this head honored a deceased individual of high status.

A closely related head is in the collection of the musée Barbier-Mueller, Geneva (inv. no. 1009-06). Alain Person provides a description of that head which is equally applicable to the present example: "The formal equilibrium of the idealised face, which seems to be contemplating inner visions, conveys a serenity definitively acquired in death.” (Person in Mattet, ed., Arts of African and Oceania: Highlights from the Musée Barbier-Mueller, Geneva, 2007, p. 152). While both heads display similar adornments in the treatment of the asymmetrical coiffure and keloids, each work showcases the individuality of an artist whose work is in the naturalistic and sensitive vein of the Twifo-Heman region.