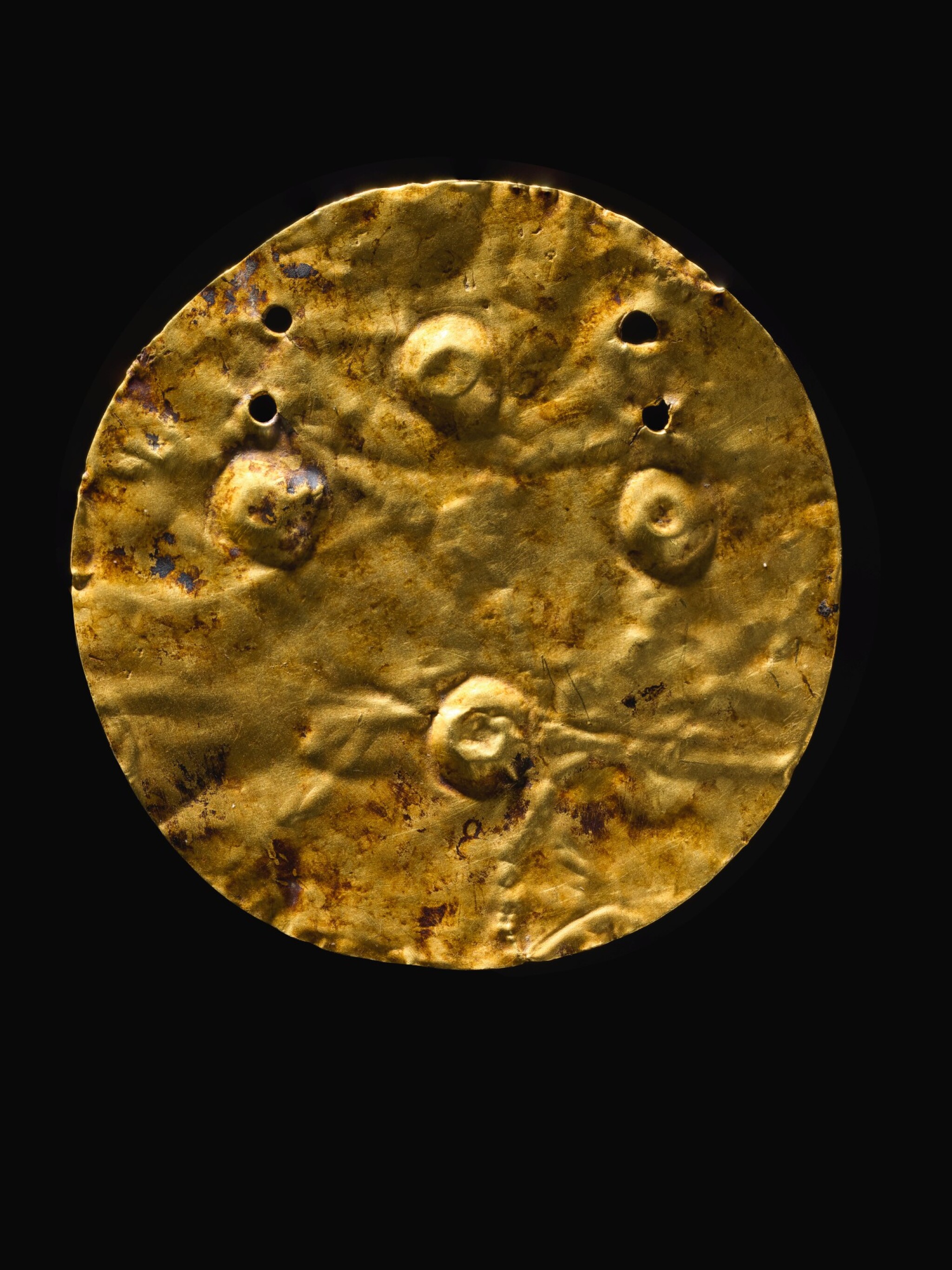 of Csáford-Stollhof type, repoussé with four bosses, pierced with two symmetrical sets of holes for attachment, and finely polished around the edge.

acquired from the above by the present owner on August 30th, 1997

The most distinctive gold objects produced by the Balaton–Lasinja culture were large gold discs ornamented with embossed knobs (gold discs of Csáford-Stollhof type). They are considered to be the second oldest gold objects in the world after those found in the Varna necropolis (4500–4300 B.C.). They were mostly discovered in hoards, as in Stollhof (W. Angeli, Der Depotfund von Stollhof, 1967, pp 491ff., now on display in the Natural History Museum, Vienna) and Zalaszentgrót (Csáford, Hungary). Beside their intrinsic value as precious metal, these gold objects were also vested with a symbolic meaning. They are thought to be stylized symbols of a goddess, perhaps worn as breast ornaments by important political or religious leaders. To this date thirteen discs of this type are know and published (I. Bóna, Javarézkori aranyleleteinkröl, Fejezetek a magyar ösrég'szet múltszázadi-szászadelji történe téböl, 1986, pp. 21-81, and P. Raczky, "Goldfunde aus der Kupferzeit. Die Anfänge der Metallurgie im Karpatenbecken," in Prähistorische Goldschätze aus dem ungarischen Nationalmuseum, exh. cat., 1999, pp.17-36). They are all decorated with three hammered knobs. The present example is the only one with four ornaments. Towards the end of the Middle Copper Age (in the Baden period, 3600-2700 B.C.), gold artifacts disappeared completely.

The present gold disc was examined together with the two eponymous Stollhof discs by the Curt-Engelhorn-Zentrum Archäometrie gGmbH. A publication of the results is in preparation. Comparative metallurgical analyses showed a close relationship between this disc and the gold objects from Varna. It is important to note that gold discs of Csáford-Stollhof type were only found in Central Europe (for a distribution map on copper age gold discs: V. Heyd and K. Walker, "The First Metalwork and Expressions of Social Power," in: Ch. Fowler, J. Harding, and D. Hofmann, The Oxford Handbook of Neolithic Europe, 2015, p. 682, fig. 35.2.). This disc is therefore another proof of intensive social, ritual and economic interaction in early Europe.