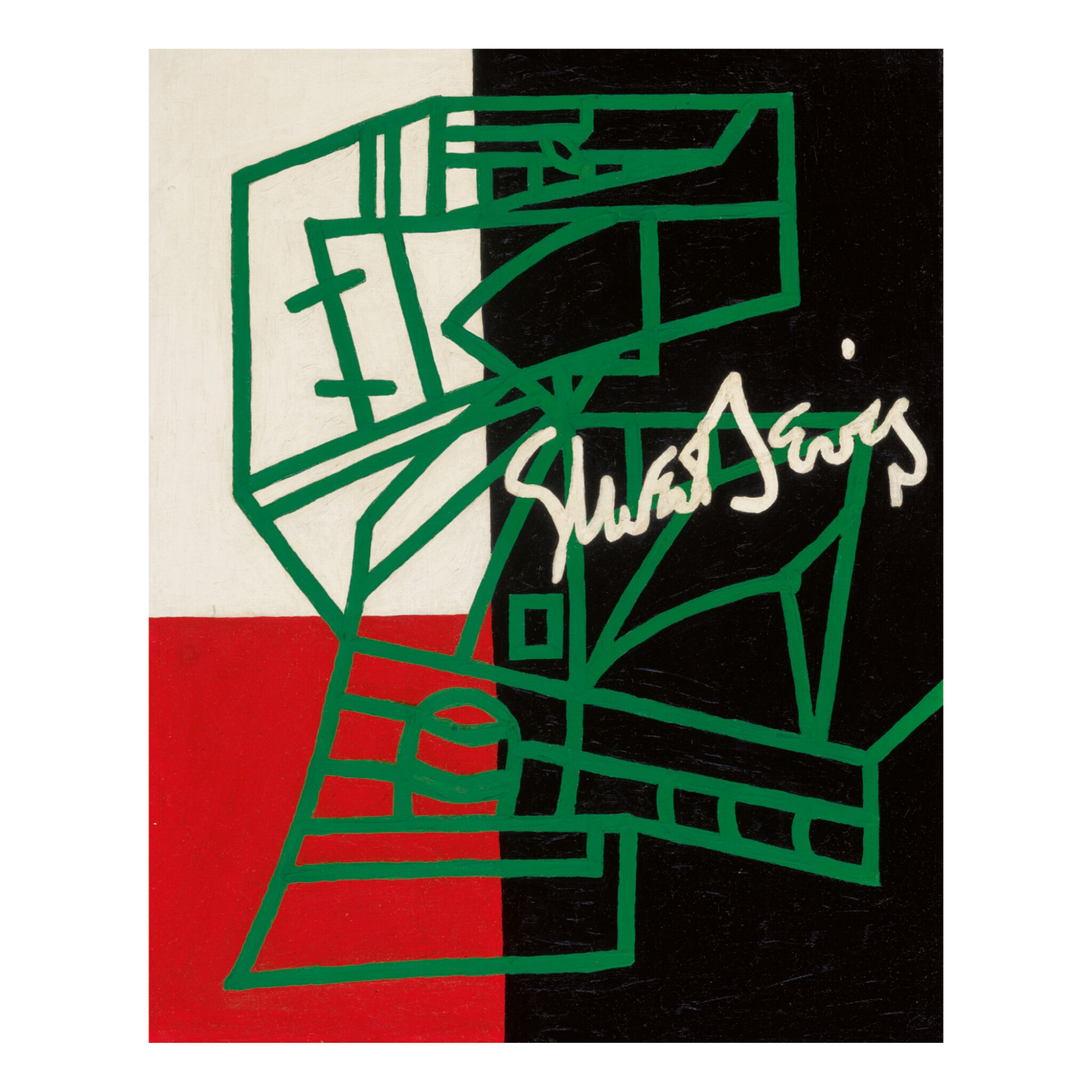 This work is in beautiful condition. It is still on its original stretcher. The paint layer is clean and very

lightly varnished. There is a small retouch at the top of the red rectangle near the left edge. Some

signature, but no retouches were recently applied here. There are similar spots to the "a" of "Davis".

These spots may well be original paint. The work should be hung as is.

Acquired by the present owner from the above, 1959

Stuart Davis originally painted UFO in 1932 and then revisited the canvas on three later occasions. In fact, the early version of UFO is recorded in the artist’s catalogue raisonné as a separate entry, titled Cask in Rigging (Fig. 1). Cask in Rigging was horizontal in orientation and the abstract shape at center was executed in red pigment against a white ground. The subject, only to be identified by the title, was likely inspired by his visit to Gloucester, Massachusetts, that same year. Authors Ani Boyajian and Mark Rutkoski confirm that upon completion, the work was signed by the artist in the lower right corner, exhibited and remained unaltered until 1956. The artist’s landscape paintings from the 1930s were defined by their angular compositions—Cask in Rigging was an important example among them.

The linear preparatory drawings and paintings Davis produced during this period illustrate an important shift in the artist’s working method. To construct his studio paintings, the artist relied on documentary studies he produced en plein air but they would become noticeably more interpretive and less exacting in detail. These drawings and paintings were often combined to build larger, more varied abstract compositions. These oil paintings were composite views, fragmented into different sections or scenes which exhibited different colors and distinctive patterning. One important work Sail Loft (Fig. 2) from 1933 marries two distinct compositions: the first, a detailed study of a ship’s exterior complete with a door on hinges and tackle rope at upper left; the second, a segmented harbor scene including a dock and associated structures configured around it. Directly at center, joining these two distinct parts, Davis inserts an image of Cask in Rigging in black and white. This deliberate placement confirms Cask in Rigging symbolized an abstract concept that continued to occupy the artist as his Modernist style evolved, by physically inserting these forms into later works and eventually reworking the canvas itself.

In the artist’s theoretical writings from this period he considered, “There are an infinite number of form concepts available. My own is very simple and is based on the assumption that space is continuous and matter is discontinuous. In my formal concept...I never ask the question: Does this picture have depth or is it flat? I consider such a question irrelevant. I consider form (matter) as existing in space in terms of linear direction. It follows then that the forms of the subject are analyzed in terms of angular variation from successive bases of directional radiation. The phenomena of color, size, shape and texture are the result of such angular variation” (as quoted in James Johnson Sweeney, Stuart Davis, New York, 1945, pp. 27-28). These concepts of linear direction and angular variation that Davis remained preoccupied with were likely the same motivations that led him to rework a number of his earlier works from the 1930s later revisiting them throughout the 1950s and 60s.

When Davis first returned to Cask in Rigging in 1956, his calendar entries detailed the initial transformation. On October 18th he recorded, “Took the...canvas Cask in Rigging (1932) and added new counter-element to it...is now composed in vertical instead of horizontal position. Painted in the new elements in white-red-grey” (as quoted in Ani Boyajian and Mark Rutkoski, eds., Stuart Davis: A Catalogue Raisonné, vol. III, New Haven, Connecticut, 2007, pp. 440-41). A line drawing in the collection of the Fogg Museum, Cambridge, Massachusetts, further illustrates the evolution Davis considered for Cask in Rigging. This drawing, Study for UFO (Fig. 3), exhibits the new orientation, now rotated 90 degrees to a vertical composition. Delineated in blue pen, Davis draws the same abstracted form at the center of Cask in Rigging now bifurcated by a vertical line through center. This division is realized in the final version of UFO with segments of black, white and red pigment that construct the background.

The following year, on June 21, 1957, Davis again returned to UFO writing in his calendar, “Painted the Drawing Field of the 16 x 20 reorganization of Cask in Rigging. Green instead of Red Orange Neutral which it has been for 20 years” (as quoted in Ibid.). An archival photograph of UFO on the easel in the artist’s studio shows the work in progress at this stage (Fig. 4). Davis made his last alterations to the canvas in May 1958, explaining, “Studied the Green Field on the old 16 x 20 canvas and defined its total position better in relation to the previous coordinate with a single line at lower right” (as quoted in Ibid.). In his last modification, Davis added a slight green line to connect the central shape out toward the right extreme edge. Finally, the artist added his signature, scrawled in white cursive through center.

Davis titled the work UFO in 1959 and inscribed it on the reverse stretcher bar. Lewis Kacher explains, “Titles of this type represent a split in public and private spheres of Davis’ artistic persona. More often, he culled the most up-to-date references from contemporary life” included among these curiosities were “the space age and unidentified flying objects” (Stuart Davis: American Painter, New York, 1991, p. 106). While the artist directly references the scientific mysteries relevant to American pop culture in the 1950s with his title UFO, it takes on dual meaning when the viewer must also confront the unidentified flying object in green at the center of the painting.