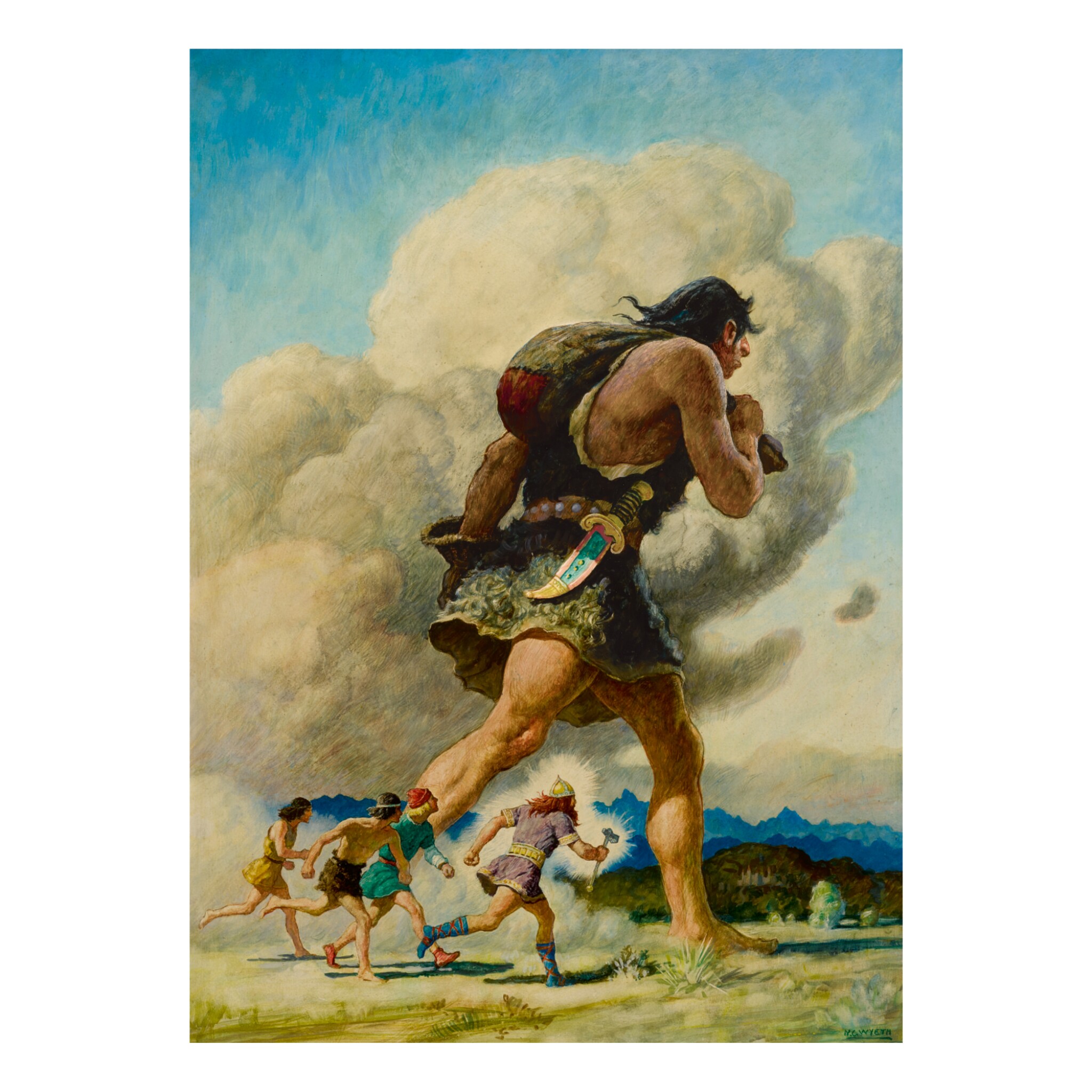 This work is in perfect condition. It is painted in oil on a type of panel that was often used by the artist. The paint layer is cleaned and lightly varnished. There are no retouches. The work should be hung as is.

N.C. Wyeth painted the present work as an illustration for “Thor’s Wonderful Journey” in the 1940 edition of Edna Johnson and Carrie Scott’s Anthology of Children’s Literature. First published in 1882 as part of Norse Stories Retold from the Eddas by Hamilton Wright Mabie, “Thor’s Wonderful Journey” recounts one of the fables of Thor, the Norse god of thunder and one of the most prominent figures in Germanic mythology.

In The Three Friends, Wyeth depicts Thor, wielding his emblematic hammer and emanating bolts of lightning as an indication of his superhuman strength, and his three companions trailing after Skrymer, a giant renowned for his deceit. Mabie describes Thor’s quest: “Thor made many journeys and had many strange adventures; but there was one journey which was more wonderful than all the others, and which proves, moreover, that the strongest and truest are sometimes deceived by those who are weaker than themselves. The giants in old Norse times were not easy to conquer; but generally it was when they hid themselves behind lies and appeared to be what they were not that they succeeded for a time. Thor’s strength was a noble thing because he used it to help men; but his truthfulness and honesty were nobler still” (Norse Stories Retold from the Eddas, New York, 1882, n.p.).

Wyeth was particularly respected for the spirit of adventure he could seamlessly conjure in his images, which not only complemented but also enhanced a narrative. Indeed, Wyeth skillfully renders each element of the composition and instills The Three Friends with a palpable energy. As the artist himself said, “Convincing illustration must ring true to life. The characters should be flesh and blood, not puppets who strike attitudes for the sake of composition, or manikins which serves as drapes for clothes, however effective the costumes in themselves may be” (as quoted in Douglas Allen and Douglas Allen, Jr., N.C. Wyeth: The Collected Paintings, Illustrations and Murals, New York, 1972, p. 128).