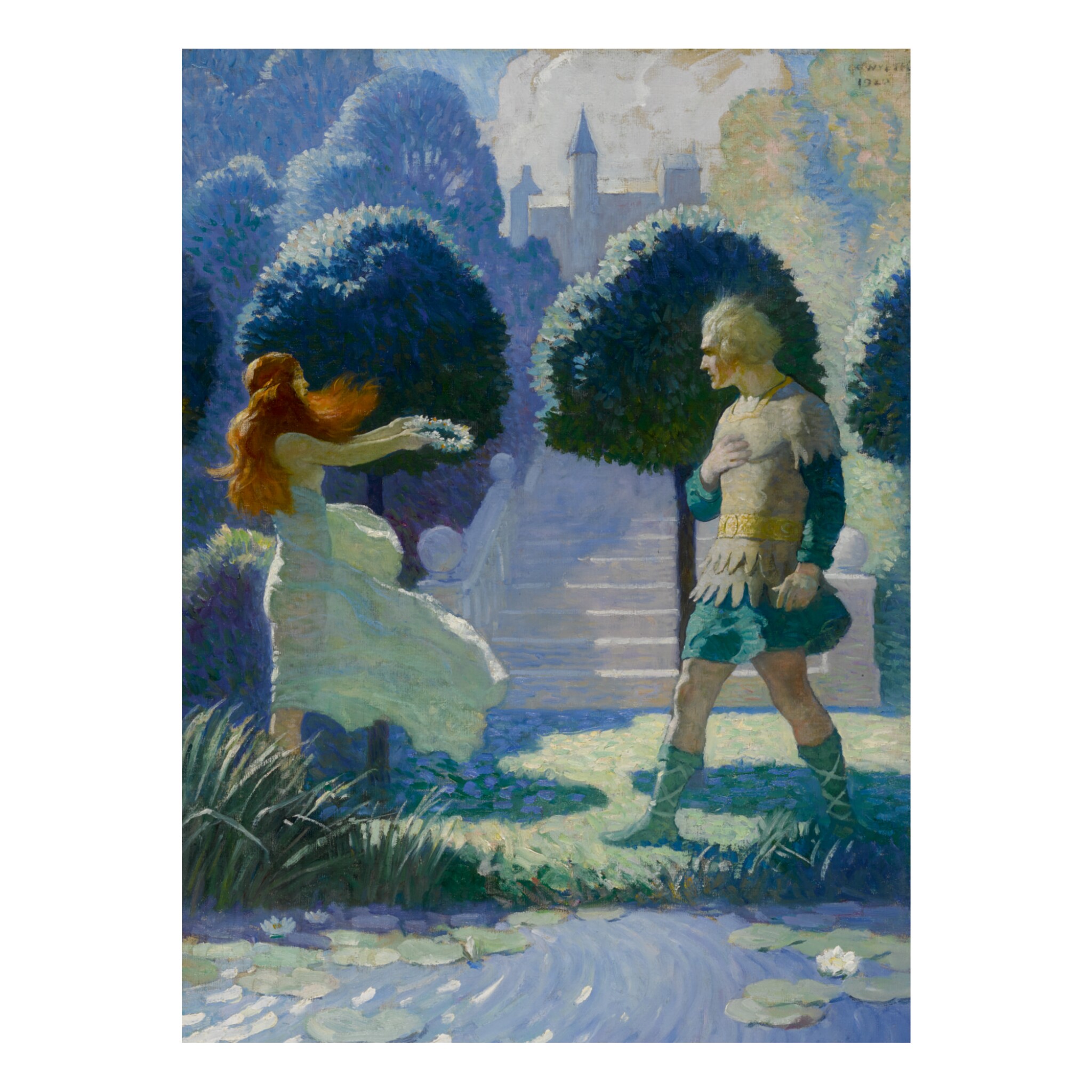 OGIER AND MORGANA (OGIER DISMOUNTED AND TOOK SOME STEPS ALONG THE STREAM, BUT WAS SOON STOPPED BY MEETING A YOUNG BEAUTY, SUCH AS THEY PAINT THE GRACES.)

This work is in beautiful condition. It is still on its original stretcher. The inscription on the reverse is undisturbed. In the center of the reverse, there is a small reinforcement corresponding to a tiny retouching in the steps beyond the figures. There is also a spot or two of retouching in the right leg of the male figure, in the tree above and around his head, and three or four spots in the dark tree to the left of the female figure's head. The work should be hung as is.

N.C. Wyeth painted Ogier and Morgana in 1924 during a period that is known today as the Golden Age of Illustration. The artist was commissioned to create 11 illustrations for the 1924 edition of Thomas Bulfinch’s Legends of Charlemagne, of which the present work is an example. First published in 1863, Legends of Charlemagne recounts the tales and folklore that became associated with Charlemagne, also known as Charles the Great and the King of Franks, who ruled Europe during the 8th century. Following his death in 814, Charlemagne emerged in literary tradition as head of the recreated empire of the West, champion of Christendom, invincible warrior, dispenser of justice and martyr. Bulfinch’s novel is derived from these romantic fables and legends, and is divided into 26 chapters, all of which follow the adventures of a heroic character engaged in a battle of good versus evil.

In the present work, Wyeth illustrates the story of Ogier the Dane, a legendary knight of Charlemagne's court, who appears in many French medieval narratives, and Morgana le Fay, a powerful enchantress who according to Arthurian legend served as King Arthur’s magical savior and protector. As described in Legends of Charlemagne, Morgana employs her magical powers to restore a 100-year-old Ogier to his youthful form but abolishes his memory in exchange. She then lures him to her mystical island palace in Avalon to be her lover for two centuries. Wyeth utilizes a soft palette of romantic green and purple hues to depict the reunion of Ogier and Morgana in the gardens of Avalon. Using details such as Morgana's iridescent dress and the palpable light breeze, he creates a dreamlike scene infused with emotion and enchantment.

Victoria Manning writes of Wyeth’s illustrations for Legends of Charlemagne, “Wyeth strove to communicate his reverence for universal spirituality in his paintings…Wyeth infused his paintings with a mystical devotion, from a patch of bark to the infinite sky, in a lifelong quest to appreciate and capture the profundity of the universe. N.C. Wyeth carefully chose his distinct colors to communicate his emotions. As early as 1908 he related in a letter to his mother his excitement over the sensation of feeling color harmonies unique to his temperament, and he expressed the desire to create a color palette of his own” (as quoted in Visions of Adventure: N.C. Wyeth and the Brandywine Artists, New York, 2000, p. 31).

Ogier and Morgana was gifted by Wyeth to William W. Lewis, a longtime employee of General Motors, who visited the artist’s studio at the invitation of Wyeth’s son, Nathaniel, in 1929. The enchanting painting, which epitomizes Wyeth’s distinct romantic aesthetic, has remained in the Lewis family ever since.