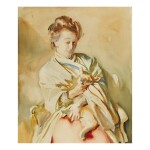 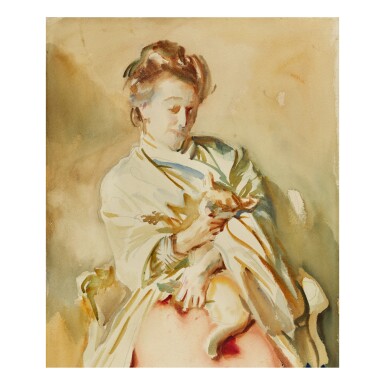 watercolor and pencil on paper laid down on board

The board is hinged to its support at two places along the reverse top edge. The sheet is very lightly toned and select pigments may be slightly faded. The sheet retains what appear to be original artist pencil notations along the lower edge. There are remnants of glue and paper from a previous mounting beneath the lower edge of the mat outside of the image.

Flora Priestley, circa 1936 (the sitter, bequeathed from the above)

Mrs. Francis Ormond (née Violet Sargent), London, circa 1944 (the artist's sister; probably bequeathed from the above)

By descent to the present owners

The present work depicts one of John Singer Sargent’s childhood friends, Flora Priestly, who the artist depicted on a number of occasions throughout his career. She is portrayed here in a loose shawl, an article of clothing often used in Sargent's Alpine figure scenes, while sitting on an elegant eighteenth century style chair holding her dog. The watercolor was likely executed in the artist's studio at 31 Tite Street in Chelsea, London.

Writing on Sargent's relationship with the sitter, Richard Ormond and Elaine Kilmurray explain: “Sargent and Miss Priestley probably knew each other as children in Nice...There is no doubt that Sargent was attracted by her striking appearance and personality as well as her penchant for dressing up in unusual costumes, and she posed for a number of studies in the 1880s. There is said to have been a romance between the two. According to Mount, Sargent proposed to her several times while, according to Ormond family tradition, it was she rather than he who was in pursuit” (as quoted in Richard Ormond and Elaine Kilmurray, John Singer Sargent: The Early Portraits, vol. 1, New Haven, Connecticut, 1998, p. 226).