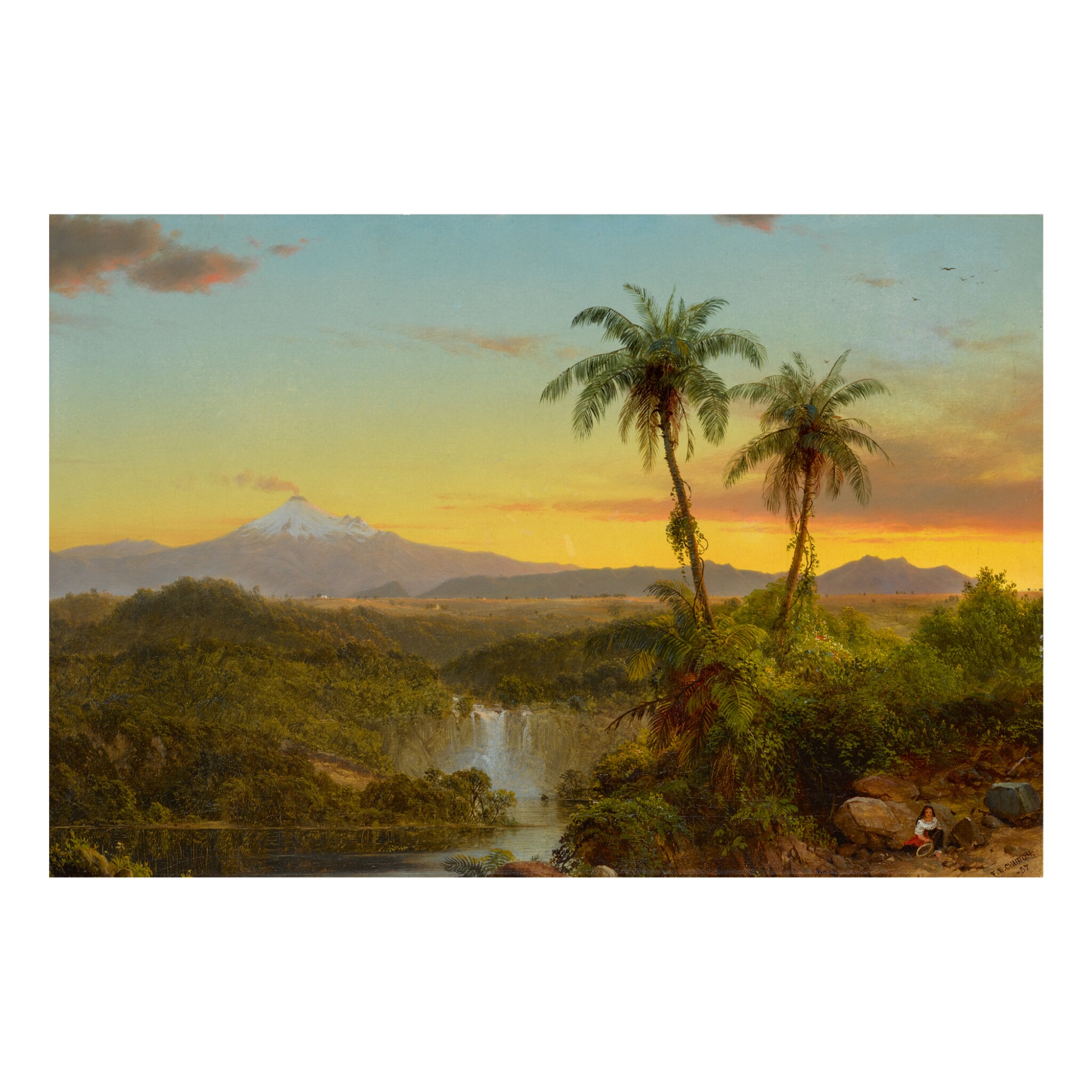 We are grateful to Dr. Gerald L. Carr for his assistance in researching this lot, which will be included in his forthcoming catalogue raisonné of the artist's oil paintings.

Leonard Meyers, Philadelphia, Pennsylvania, circa 1858 (acquired from the above)

Acquired by the present owner from the above, 1982

In seeking to understand the monumental achievement that was Frederic Church’s body of work depicting the Americas, which were revered the world over, one must consider the profound influences that instructed his artistic prowess and spiritual inclinations toward the natural word. It was Thomas Cole, founder of the Hudson River School movement, who mentored the young artists from 1844-46 and can be credited with teaching Church a foundation of the artistic principles of American landscape painting. Moreover, it was Alexander von Humboldt who inspired Church’s devotion to Naturalism.

As a prominent theorist and artist during the period, Humboldt exposed the world to the wonders of the American tropics through his renowned publication Cosmos: A Sketch of a Physical Description of the Universe. Through his accomplished body of work, Church appears to embody Humboldt’s philosophy that dictates “Landscape painting, though not simply an imitative art, has a more material origin and a more earthly limitation. It requires for its development a large number of various and direct impressions which, when received from external contemplation must be fertilized by the powers of the mind, in order to be given back to the sense as a fine work of art. The grander style of heroic painting is the combined result of a profound appreciation of nature and of this inward process of the mind.” (Alexander von Humboldt as quoted in Eleanor Jones Harvey, Frederic Church’s Olana On the Hudson, New York, 2018, pp. 94-95)

In these encyclopedic volumes Humboldt sought to inspire the artistic exploration of territories outside of the historically European survey. No artist of the period appears to have embodied Humboldt’s doctrine as whole heartedly as Church, in reading the following passage from Cosmos, Church’s ambitions come to focus: “Are we not justified in hoping that landscape painting will flourish with a new and hitherto unknown brilliancy, when artists of merit shall more frequently pass the narrow limits on the Mediterranean, and when they shall be enabled far in the interior of continents, in humid mountain valleys of the tropical world, to size, with the genuine freshness of a pure and youthful spirit, on the true image of the varied forms of nature?” (Alexander von Humboldt as quoted in David C. Huntington, The Landscapes of Frederic Edwin Church: Vision of an American Era, New York, 1966, p. 42)

Church consumed Humboldt’s writings about the South American continent, combing over its pages of maps, scenic engravings and detailed travel itineraries as he prepared for his own sabbatical to the region. Church completed two trips to Ecuador as part of his sweeping exploration of South America, the first in 1853 and again in 1857. Departing from New York City in April of 1853, he chose a companion for the journey, friend and fellow landscape painter Cyrus West Field, arriving in Colombia later that month. Following an arduous journey later that summer the two crossed the border from Colombia into Ecuador, recording in his travel diary, “After a disagreeable journey across an elevated plain with a cold piercing wind and a sprinkling of rain we finally came to the edge of an eminence which overlooked the valley of Chota. And a view of such unparalleled magnificence presented itself that I must pronounce it one of the great wonders of Nature. I made a couple of feeble sketches this evening in recollection of the scene. My ideal of the Cordilleras is realized.” (as quoted in David C. Huntington, The Landscapes of Frederic Edwin Church: Vision of an American Era, New York, 1966, p. 43) It was then that Church took his first glimpse of Cotopaxi, committing the monument to memory in his sketchbook. (fig. 1)

According to Katharine Manthorne, the present work most closely relates to a similar canvas at the Art Institute of Chicago, entitled View of Cotopaxi. (fig. 2) Likely executed from sketches produced during his first trip to Ecuador in 1853, Manthorne confirms that both the Museum’s painting and the present work, South American Landscape, can be dated prior to Church’s second trip to Ecuador, in the early months of 1857. (Katharine Manthorne, Creation & Renewal: Views of Cotopaxi by Frederic Edwin Church, Washington, D.C., 1985, p. 71) Both paintings are categorized by the momentous Cotopaxi volcano which looms large in the distance of the composition at far left. A geological phenomenon in the nineteenth century during the age of exploration, Cotopaxi gained its status as the highest active volcano to mark the Andes mountains of Ecuador at a soaring 20,000 feet above sea level. (ibid, p. 7)

In Church’s South American Landscape, Cotopaxi’s peak is seen billowing with smoke in the distance. The active volcanos that protruded the Ecuadorian landscape enthralled Church and is further confirmed by how well documented they remain in his site drawings and journals from this 1857 excursion. It was during his second tour of Ecuador that Church observed the eruption of a similar peak, the Sangay volcano. His sketches documented the event from approximately twenty miles west of the volcano and his diary described the explosions which occurred at forty-five minute intervals, producing a “black and somber eruption cloud that piled up in huge, rounded forms cut sharply against the dazzling white of the column of vapor and poling up higher and higher, gradually was diffused into a yellowish tinted smoke through which would burst enormous heads of black smoke which kept expanding, the whole gigantic mass gradually settling down over the observer in a way that was appalling.” (as quoted in Richard S. Fiske and Elizabeth Nielsen, Creation & Renewal: Views of Cotopaxi by Frederic Edwin Church, Washington, D.C., 1985, p. 2)

Church made some accommodations in constructing the ideal landscape, as evidenced by the present work, incorporating expansive mountain terrain which meets lush vegetation and rising palms. This confluence characterized Church’s South American pictures and pleased the patrons that poured over his tropical landscapes. (ibid, p. 20) Manthorne went on to conclude: “This Wölfflinian progression, recapitulating within his work the development of landscape art from the more linear and topographical to the more painterly passage from the example of Cole—his earliest master whose influence marked the first decade of Church’s career—through the guidance of Humboldt and Ruskin, to Turner, who helped him to achieve his artistic maturity. Intersecting nearly every critical influence that informed his work, the evolving visions of Cotopaxi trace Church’s development as an artist.” (ibid)

The present work is a hallmark among Church’s most triumphant naturalistic paintings, exacting in scientific detail each canvas serves as a visual documentary of Church’s own awesome regard for the region. South American Landscape is an important canvas, preceding acclaimed works such as the colossal canvas Heart of the Andes (fig. 3), in the collection of the Metropolitan Museum of Art, New York, realized after his return to the states in 1859, and his final soliloquy Cotopaxi (fig. 4) of 1862 at the Detroit Institute of Arts, Michigan. It is within these landscapes, which layer Andean vistas so diverse in geographical detail and complete with open expanses further dotted by haciendas and their inhabitants, that Church unites man with nature’s formidable kingdom.