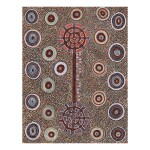 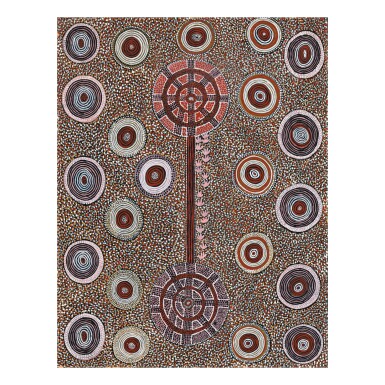 Property from the Collection of Fiona Brockhoff

Synthetic polymer paint on composition board

Bears Papunya Tula catalogue number A731078, title and a large annotated diagram in Peter Fannin's hand on the reverse

No repairs or restorations. Housed in a minimalist black wooded frame. A small nail hole pierced about 2cm diagonally inwards from each corner. Chipping to board at lower and upper left hand corners, and 4cm below the upper left hand corner, and at other small areas around the board's extremities. A few very minor/tiny areas of paint loss through out the board's surface. Paint in good and stable condition overall.

Most probably painted at the Pintupi outstation of Yai-Yai, in October 1973

The original documentation accompanying this painting was recorded by Peter Fannin who had succeeded Geoffrey Bardon as the manager of Papunya Tula Artists. It identifies the subject as being the ancestral echidna or porcupine traveling between a cave near the present day Pintupi settlement of Walungurru (Kintore) to another in the east, as represented by the two large circles. The ceremonial associations of the work are indicated by the concentric roundels that refer to a variety of ritual designs painted onto the bodies of ceremonial participants. According to the anthropologist Professor Fred Myers who carried out extensive fieldwork with the artist, the subject of this work may relate to the Tarkurrnga narrative that takes an ancestral echidna from near Angus Hills to the east. However, Myers suggests that it is probable that the word 'Kuningka' was incorrectly heard by Fannin as 'Echidna', as the main subject of this painting is Kuningka the Native Cat who is not usually associated with Walungurru, though the ancestor is said to have visited the site of Tikatika to the southeast. Kuningka, 1973, relates to a later canvas by Anatjari about his major 'Dreamings: Big Map of Country,' 1975, illustrated in Myers, F.R., Painting Culture: The Making of an Aboriginal High Art, Duke University Press, Durham and London, 2002, p. 105, pl. 4. This work connects the ancestral Native Cat to Kutungu the Snake Woman and a Tingarri man that is being chased by the Cat. Here, the Cat's tracks which traverse the canvas are drawn in a similar fashion to those joining the two larger roundels in Kuningka, 1973 (Myers, 2002, pp. 105–106). Kuningka is a recurring theme in Anatjari's paintings, however Geoffrey Bardon describes the ancestor that bears this name as a 'kangaroo rat' or hopping mouse (Bardon, G., and Bardon, J., Papunya, A Place Made After the Story: The Beginnings of the Western Desert Painting Movement, The Miegunyah Press, Melbourne, 2004, pp. 454–457). Anatjari usually renders the subject in a series of square or rectangular motifs as in Rat Kangaroo Dreaming, c. 1974, in the collection of the Museum and Art Gallery of the Northern Territory, Darwin, and Rat Kangaroo Dreaming, 1972, in the collection of the Art Gallery of Western Australia, Perth, both illustrated in Perkins, H., and Fink, H. (eds), Papunya Tula: Genesis and Genius, Art Gallery of New South Wales in association with Papunya Tula Artists, Sydney, 2000, pp. 21 and 22 respectively; and 'Kuningka' Kangaroo Rat Dreaming (Version 3), 1973, illustrated in Bardon and Bardon, 2004, painting 430, p. 455.