A Passion for Collecting: The Rugs and Carpets of a Connoisseur 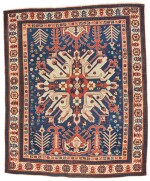 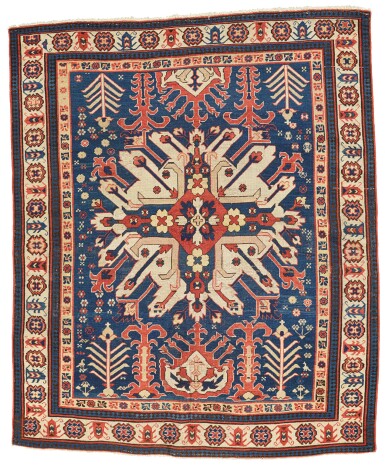 Pile generally good for age. Knot bars beginning to appear but with some repiling particularly through centre as follows. Minor repiling in the white of upper half of medallion and more extensive repiling in lower medallion, particularly in the top third left-hand corner. Blue, white, red and beige are all replied. Partial repiling in upper and lower yellow rosettes of the centre diamond. Left and right-hand yellow rosettes are replied. Centred diamond and rosette partially repiled. Scattered minor repiling in lower centre of field and spot repiling elsewhere. Sides and ends skewered with cotton herringbone tape and edges with new red side cords are a bit tight so the rug is pupetting slightly. Overall, very good looking. Beautifully crisp drawing.

Belonging to a rare corpus of late 18th and early 19th century rugs, of which this is the only known blue-ground example, which link the 17th/18th century ‘Blossom’ and ‘Dragon’ carpets of Karabagh with the later ‘Chelaberd’ (also called ‘Sunburst’ and ‘Eagle’) rugs of the 19th century.

Whilst the rugs share a consistent field layout of a large blossom medallion with pendant palmettes flanked by vertical hooked forms and stylised plants or trees, the Liambei, Bortz and Burns rugs each have a ‘crab gul’ border familiar to us from very many later 19th century Kazak rugs, whilst the borders of the rugs in the Victoria and Albert Museum and the National Gallery of Prague relate to those of the present example, perhaps suggesting production in different workshops. A rare small format ‘Blossom’ rug, from the Estate of Robert Montgomery Scott, "Ardrossan," Radnor, Pennsylvania, sold Freeman’s Pennsylvania, 14 December 2006. Lot 926, for a record breaking price of $341,625, has a narrow floral border related to the guard stripe seen in the present lot. The 18th century 'Blossom' carpet in the Museum of Fine Arts, Boston, Acc. No. 53.156 (with blue ground) has a border which could well be the prototype for the main border of the present lot. It also has identical dark blue and black narrow reciprocal guard stripes.  Jon Thompson in Milestones, op.cit., Ch. 8, pp. 244 – 259, discusses the development of this design from the 17th and 18th Caucasian carpets, themselves a development from classical Persian models of the preceding centuries, and illustrates a ‘Blossom’ carpet, ibid., pl. 28, with large sunburst-type blossom medallions of the type which provided the model for these rugs.