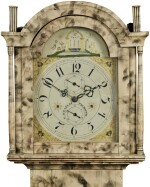 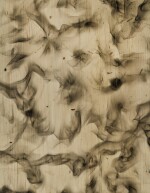 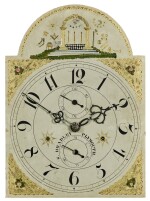 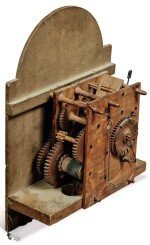 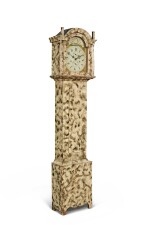 The molded arched bonnet flanked by fluted column finials over an arched glazed door flanked by pilasters enclosing a white enamel circular dial with Arabic numerals, embellished with gilt spandrels, signed S. Hoadley Plymouth and set before a key winding wood eight-day weight-driven mechanism, the face surmounted by an ellipse of Masonic symbols on a waisted pendulum case on a box base with scalloped apron and black feet, decorated throughout with a smoke-like pattern created by a free-form application of paint in shades of gray and ecru. The interior of the trunk door with a paper label inscribed This clock to be given to Millard E. Day Mary L Wells.

In overall fine condition. Retains a rich patina. Wear, discoloration, and areas of loss with painted surface, particularly to the edges, consistent with age and use. The dial retains almost all of its original gilding with very few minor losses. There are some paint cracks visible, particularly to the crest of the hood. The glass is replaced. The clock never had finials.

Silas Hoadley (1786–1870) was one the leading American clockmakers of the first half of the nineteenth century and is best known for his tall-case and shelf clocks. Like this example, most of his tall-case clocks had wooden works. He was a partner with fellow Connecticut clockmakers Eli Terry (1772–1852) and Seth Thomas (1785–1859), who pioneered the mass production of works for tall-case clocks between 1807 and 1810. These mass-produced works, thousands of which continued to be made by all three men after their partnership split up, made clocks affordable to the burgeoning American middle class, who could choose equally inexpensive pine or poplar cases built and painted for them by local retailers.

The works and delicately painted face of this clock are signed by Hoadley, while the painter of the simple case is unidentified. Painting with smoke was popular in the early decades of the nineteenth century; the technique involved applying a wet coat of paint over a dry base layer and then passing a smoking tallow candle across the surface to create random translucent patterns.