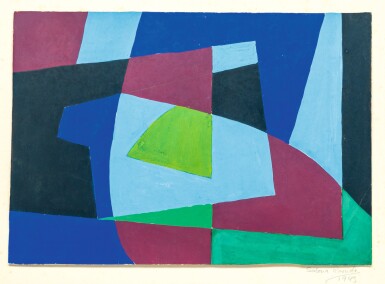 signed and dated Saloua Raouda 1949 on the mount

gouache on paper mounted on cardboard

This work is accompanied by a certificate of authenticity signed by the Saloua Raouda Choucair Foundation.

This work is in good condition. There is a light folding mark on bottom right with small spots of flaking and light craquelure in centre and bottom centre, due to the artist's choice of medium. The outer edges are not fully straight, inherent of the artist's working process. There is no restoration apparent when viewed under the UV light.

Estate of the artist, Beirut

Acquired directly from the artist by the present owner in 2013

Looking back, Choucair had a long and fascinating career, one which was not unusual in the ebbs and flows of its contemporary, commercial successes. Her artistic oeuvre is woven with the direct influences of Fernand Léger in Paris and framed by her pioneering application of abstraction in Beirut. Large scale sculptural work, portraitures and her peaceful semi-abstract canvases speak of an artist who had a profound mastery of technique and a deeply considered aesthetic vision. Her style never felt appropriated in the way that paintings can so often feel, in-authentically, contrived. Seeing the European avant-garde at first hand, she was able to interpret it with her own unique response – we can see this in the way she reacted to Léger and the similarities we can draw with Delaunay’s work for instance. She had her own form of Arab abstraction, shaped by Islamic geometry and calligraphy but not limited by it; coloured by the palettes of her Parisian contemporaries and not dissimilar to those used in the soft abstract landscapes of many Lebanese artists of her generation.

Most recently, in November 2018, Saloua Raouda Choucair was part of a fascinating survey exhibition at Dusseldorf’s K20 museum, reconsidering European modernism through a global narrative. The show focused on seven distinct moments from the history of modern art in Japan, Georgia, Brazil, Mexico, India, Nigeria, and Lebanon. Works were placed in dialogue with the museum’s extensive modernist collection, founded in 1960, alongside a selection of works by Paul Klee. This is of importance, not only because the exhibition can be placed so aptly on the arc of our current social and political dialogues of national centrism, but because once again it so clearly portrays Choucair’s importance within the re-framing of a conventional reading of post-war art dominated by Europe and the USA.

Rhythmic Composition is a wonderful example on canvas of Saloua Raouda Choucair’s artistic brilliance: beyond Western, beyond the Levant and gently floating above any constraints of absolute stylistic categorization. This is the first time Sotheby’s has included a painting by Choucair and it is a stunning example by an artist who is finally getting the global attention her career deserves.