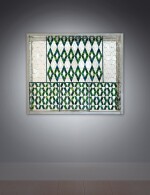 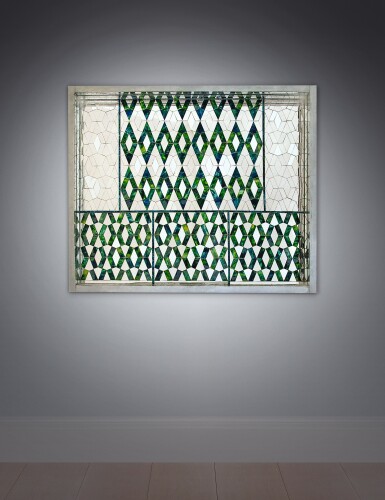 This work is in good condition. There is very minor discolouration of the metal frame in places, with few strips of mirrors in the inner frame cracked with one small loss on the centre left of the inner frame, all related to age and inherent of the artist's working process. There is no restoration apparent when viewed under the UV light.

The catalogue illustration is very accurate; however, the mirrors sparkle and reflect more in the original work.

Few Iranian artists have become as celebrated and appreciated as Monir Shahroudy Farmanfarmaian. Born in 1922, she lived a prolific life till April 2019, and died in her native Iran after having seen the first ever museum dedicated to a female artist in Iran set up in her honour. She was artistic ever since her childhood, and after graduating from the Faculty of Fine Arts of Tehran University, she moved to New York where she eventually studied at Parsons School of Design. She gained exposure to New York's avant-garde scene and over the longer term befriended the likes of Andy Warhol. Monir moved back to Tehran in the late 1950s and became fascinated with "tribal and folk artistic traditions" of her country. She was featured in the 1958 Venice Biennale and held shows in a number of galleries. Around the 1970s, Monir visited the Shah Cheragh Mosque in Shiraz which proved to be a turning point in her career. She soon developed an acute interest in mirror mosaic artwork, expressing this fascination in her memoirs: "the very space seemed on fire, the lamps blazing in hundreds of thousands of reflection... it was a universe onto itself, architecture transformed into performance, all movement and fluid light, all solids fractured and dissolved in brilliance in space, in prayer." (Hans Ulrich Obrist and Karen Marta, Monir Shahroudy Farmanfarmaian: Cosmic Geometry, London 2011).

With the help of the Iranian craftsman Haji Ostad Mohamad Navid, Monir went on to produce many creations over the years, experimenting with a multitude of shapes and geometric abstraction which evoked aspects of Sufism and her Islamic heritage. She never ceased to acknowledge her own heritage for her inspirations, and professed a great love of Iran till her dying day. In the Introduction to a volume dedicated to her work, Hans Ulrich Obrist refers to the 'mondialité', "the extraordinary adventure... whereby we all live today in a world that is...simultaneously multiple and unique." (Hans Ulrich Obrist and Karen Marta, Monir Shahroudy Farmanfarmaian: Cosmic Geometry, London 2011). Monir is the artistic epitome of this uniqueness within a global multiplicity.

She has been one of the most widely exhibited artists of her generation, with a celebrated retrospective at the Guggenheim Museum, New York, in 2015, as well as other shows in major museums around the world. Her work is held in important international and Iranian collections.

Sotheby's is proud to present a fine example of the artist's mirror geometric abstractions, a beautiful work from the 1970s which was originally part of a mural. It bears the artist’s characteristic flair for manipulating form, reflections and prisms – a veritable ode to the exquisite embellishments of Islamic interior architecture.