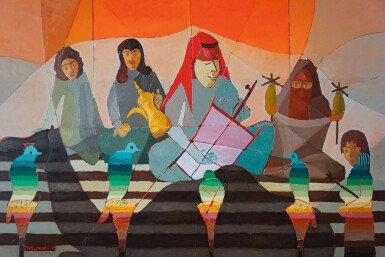 signed M. Resayes in Arabic and dated 2015; signed, titled and dated in Arabic on the reverse

This work is in fair condition. The canvas is slack and would benefit from restretching. The paint seams not to be completely dry, perhaps the varnish was applied too early as the surface remains slightly tacky and soft. The raised impasto areas are very soft. The surface of the paint was covered with bits of white polystyrene which was used to protect the front of the painting and it got attached to the surface in some places affecting the surface of the impasto being pressed and damaged. There was restoration done on the work prior to the sale where the white bits of polystyrene were removed adjusting the texture and sheen of the areas where damaged and the spots of surface losses were retouched and varnished. The restoration is only visible under UV light.

The catalogue illustration is accurate; however, there is more shine to the overall tonality in the original work.

Collection of the artist, Saudi Arabia

Acquired directly from the above by the present owner

Mohammed Al Resayes began to paint and draw in 1973 in high school in Riyadh, before travelling to Cairo to further nurture his paintings abilities. At this stage he based his technique on a close study of the art of impressionist painters. He was attempting to integrate the brushstroke techniques of Impressionism with the contracted, reassembled space of Cubism, depicting sceneries reminiscent of his rural background.

In the 1990s, Al Resayes became involved with the emergent expressionist movement of the Saudi pioneers who preceded him. On his return to Riyadh, he worked at the King Saud University as an art teacher, and became the president of the Art Department a few years later. Among the large-scale paintings on which he worked are Waiting for The End (1985), Falcon and Spindle (1985) and his series Architectural Elements (1982), which all revolve around exile, pain and misery. The style of his works, particularly the composition of figures in space in Borrowed from Tradition (1980), owed much to the cubic style.

Like many of his contemporaries, beyond his thrive to contribute in the building of the Saudi art stage, Al Resayes spent his life developing an aesthetic sensitivity and vision out of the diverse range of abstract influences that challenged artists of his era. In the 1980s he constructed a private mythical world, pouring into the canvas his acute awareness of the ongoing debate that opposed tradition to modernity, in his attempt to conciliate the everlasting and the transitory. Towards the end of his career, his style met a radical shift and evolved into single dark images embedded in a morass of obscure paint, confounding the Saudi art stage with a new figurative style and a personal iconography.