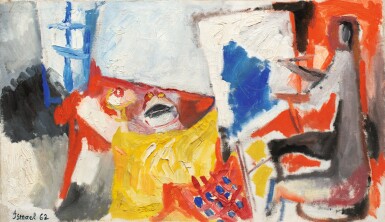 oil on canvas laid down on panel

This work is in good condition. There is some minor craquelure where the impasto is thicker i.e. the yellow and red paint in the centre bottom and the white paint on the upper right. There is no restoration apparent when viewed under the UV light.

The catalogue illustration is accurate; however, there is more texture visible in the original work.

This painting is a beautiful melange: part traditional still-life, part portraiture. The identity of its subject is most likely a rendering of the artist’s imagination rather than a self-portrait – although the scene is said to be of the artist’s studio in Rome.

Both Pablo Picasso and Henri Matisse were said to be major influences on Fattah during his studies in Rome. The vibrancy of Fattah’s colour palette while not dissimilar to Picasso's in his bold use of paint, is perhaps more comparable in style and colouring to Matisse. The intentionally disproportionate sizing of his subject’s limbs are almost sculptural. While there have been no stated or known direct references, we can draw visual comparisons to Henry Moore, whose beautiful figurative sculptures were at once angular and softly rotund.

A simple but charming detail shared by the artist’s studio describes this work as being painted at a time when Ismail Fattah was eating fish – for which he had a particular taste. In a style similar to the French modernists of the time, we indeed see, in a flattened picture plane: a plate of fish. We may draw with levity, some autobiographical symbolism. Adding to our understanding of the work, we can also compare it stylistically (and more specifically) to still-life paintings by Picasso, in particular those that included fish – a subject which also featured in many of Picasso’s ceramics.

Ismael Fattah had a particular style and palette in his 1960s period: he mainly used white, red, blue, with accents of black and yellow. This painting is beautifully balanced in composition and in palette, leaving it to us to imbue it with autobiographical subtext.