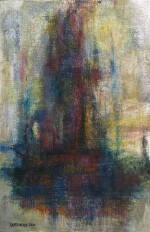 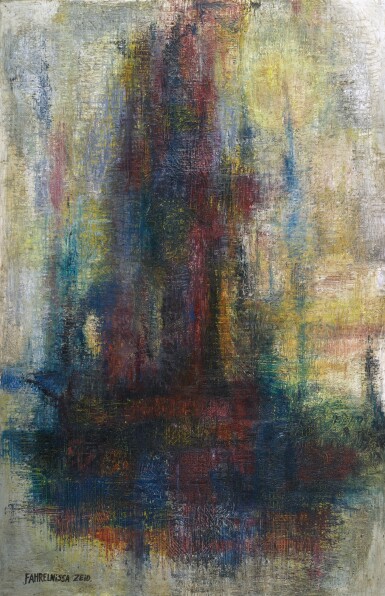 The authenticity of this work was kindly confirmed by H.R.H. Prince Raad bin Zeid Al-Hussein with an inscription on the reverse.

This work is in very good condition. The work would benefit from a light clean. There is no restoration apparent when viewed under the UV light.

The catalogue illustration is fairly accurate; however there is more contrast and texture in the original work with the overall tonality being lighter where the reds, blues, greens and yellows come through stronger and separate, in particular in the lower part of the painting.

Estate of the artist, Amman

Acquired directly from the above by the present owner in 2015

That one would immediately draw comparisons to Monet would perhaps, upon first reading, appear to belie an artist who is best known internationally for her majestic abstract mosaic canvases after a seminal retrospective at Tate Modern, London in June 2017.

Fahrelnissa Zeid’s oeuvre in the mid to late 1950s was unequivocally abstract. Her earlier works were by contrast, more difficult to classify within a single movement or style. During the first few decades of painting, she would draw from the styles of various European movements: Expressionism to Fauvism, Realism to Cubism as they intuitively made their way into her artistic sensibilities.

The two stunning canvases we are honoured to offer here were painted in the late 1950s in London. Although we may place these works in Zeid’s more abstract period of production, these works bear the clear hand of a painter with a strong brushwork and a sensitivity towards colour and light. In this way, we can say that the European artistic styles that mirrored her own travels, would still continue to work their way into her visual narrative.

Zeid painted stunningly vibrant and arresting scenes from her daily life, travels, dreams and memories. While some of her works from the 1920s or 1940s may have shown great resemblance to the busy compositional arrangements of Brueghel (her favourite artist) – the two works on offer here are more implicit examples of a conflation of different artistic influences. Both these paintings still allude to abstracted city or landscape compositions, albeit, in diametrically opposing styles to her earlier works. Untitled (Green Abstract) is gently reminiscent of Monet’s Waterlilies. Purple Fog cleverly alludes to Claude Monet’s London series with his foggy depictions of the famous Houses of Parliament in London. Fahrelnissa was “producing a series of paintings that appear to show the London cityspace…” (Adila Laïdi-Hanieh, Fahrelnissa Zeid Painter of Inner Worlds, London, 2017, p. 210). “These works are all similar paintings of a blurred and hatched horizon line of a city with tall buildings. Fahrelnissa worked on this series,[…], in the vein of an abstract landscape painter.” (Adila Laïdi-Hanieh, Fahrelnissa Zeid Painter of Inner Worlds, London, 2017, p. 210).

Irrespective of the content of her paintings, as Necmi Sonmez so aptly states, “she was concentrating all her attentive powers on an investigation of the problem of colour…” as, “the element of colour was for Zeid the single most indispensable constituent of a composition.” (Necmi Sonmez, “The World of Fahr El Nissa’s Art as a Model of Liberation” in: Exh. Cat., Istanbul, Cemal Resit Rey Sergi Salonu, Fahrelnissa Zeid, November 1994, p. 31). And all of a sudden, in these late 1950s series of works, “The [palette] knife became her most important instrument, which she now used instead of colour to give movement to her works.” (Adila Laïdi-Hanieh, Fahrelnissa Zeid Painter of Inner Worlds, London, 2017, p. 210).

Fahrelnissa Zeid moved to London with her husband, Prince Emir, in 1946 after he became the Iraqi Ambassador to the United Kingdom. Her new life in London and subsequently her time split between Paris, would mark a pivotal new era in Zeid’s career and artistic output. Upon moving to London, Fahrelnissa quickly immersed herself in the art scene there mainly through introductions during their diplomatic tenure. She would become close friends with leading gallerists, curators, artists and critics including Roland Penrose and Lynn Chadwick.

That Zeid would naturally imbue a conflated and inspired creative spirit into her canvases was evident from her personal and social life. She was warmly and graciously social, and loved entertaining guests. She would throw the most lavish parties in her ambassadorial home for such soirees. The home was decorated as if it was the harmonious meeting place of the Orient and the Occident. Decorated with colourful kilims alongside a sculpture by Henry Moore and Cesar, a wooden mobile by Lynn Chadwick and Zeid’s own paintings – their home was a true melting pot. The couple would remain in London until the late 1960s when they permanently moved to Paris before moving to Amman a few years later. After a long period in London, the influence of the city on Fahrelnissa Zeid (and her subsequent movements within it) are significant within a particular body of her work.

Fahrelnissa’s works became increasingly more abstract after her move to London. Her canvases became more complex stylistically: she played with compositional arrangements, textures and colour palettes – in a way, many of her paintings came together, harmoniously woven like a beautifully laid out carpet. Fahrelnissa’s paintings from 1946 to the early 1960s are mainly composed of organically formed geometric shapes, recalling a surface of fractured light, luminous with colour. In Monet’s waterlilies, an adroit application of light and brushwork to create wistful dreamlike and abstracted scenes is universally appreciated for its undeniable beauty. The repetition of the ‘motif’ or pond scene is a testament to the depth of the painterly hand in its ability to render multiple and varying portrayals of a single subject matter. Lighting and frenetic brushwork can indeed mark the difference between a scene of idyllic calm or one ravaged by angst and implicit foreboding (as seen in the stylistic differences of these two particular works). Our implicit readings are perhaps secondary, but they add depth to our understanding of the context from which these works came from. Serene or ominous, these semi-abstract works are truly, rich in meaning and texture.

Both Untitled (Green Abstract) and Purple Fog are great examples of Fahrelnissa's unique painterly style from the 1950s. Dr. Adila Laïdi-Hanieh mentions the following about Fahrelnissa's work from this period: "They look less like a Fahrelnissa painting and could have been painted by anyone although the intensity of colour remains... The palette is still as sombre and as menacing as in the previous phase, but the busy menacing motifs have gone in favour of large swathes of pure colour distended onto the canvas and bleeding into other darker colours... The surface [...] is also slashed with the palette knife...Where the paint creates a vertical direction, the knife superimposes a horizontal grid, and vice versa. Fahrelnissa was fond of this technique and was proud of introducing it to her students in the 1980s." (Adila Laïdi-Hanieh, Fahrelnissa Zeid Painter of Inner Worlds, London, 2017, p. 187).

Fahrelnissa’s first solo show in London opened at St George Gallery in 1948 which was also attended by the H.R.H. Queen Mother of England. Fahrelnissa would immediately be lauded with the title ‘Painter Princess’ following the show. In the summer of 1954, Fahrelnissa’s solo show at the Institute of Contemporary Art, London also opened. Fahrelnissa’s show at the ICA was particularly important for her career, making her one of the first and few female artists to exhibit at this prestigious institution in the heart of Europe. Splitting her time between her diplomatic role and her artistic calling, Fahrelnissa was simultaneously exhibiting with the Nouvelle École de Paris artists in Paris and continued opening her shows in London. Subsequently, Fahrelnissa bought a small apartment on Rue de Grenelle and started to use it as her second studio alongside the one at their ambassadorial home in London. In this milieu Fahrelnissa found her spiritual home.

Fahrelnissa Zeid was one of the rare artists that was able to experience success during her lifetime, which of course reached a pinnacle posthumously. Two retrospectives on Fahrelnissa were organised by her daughter, Shirin Devrim at the Fine Arts Academy in Istanbul (May 1964) and the Hittite Museum in Ankara (June 1964 ). In 1990, she had two retrospectives at the Institute du Monde Arabe, Paris and the Neue Gallerie (Sammlung Ludwig) in Aachen. A large selection of Fahrelnissa's works were most recently exhibited at the 12th Sharjah Biennial in 2015 and at the 14th Istanbul Biennial the same year. Fahrelnissa’s major restrospective at the Tate Modern (June 2017) also went on to travel to the Deutsche Bank Kunsthalle in Berlin in October 2017. Besides having exhibitions all around Europe and New York, her works are currently in the collections of leading museums such as Tate Modern, London, Istanbul Modern, Istanbul and Mathaf: Arab Museum of Modern Art, Doha. Further accolades include Fahrelnissa being awarded the Star of Jordan for her contribution to the arts. She was also made Commandeur des Arts et des Lettres by the French government.