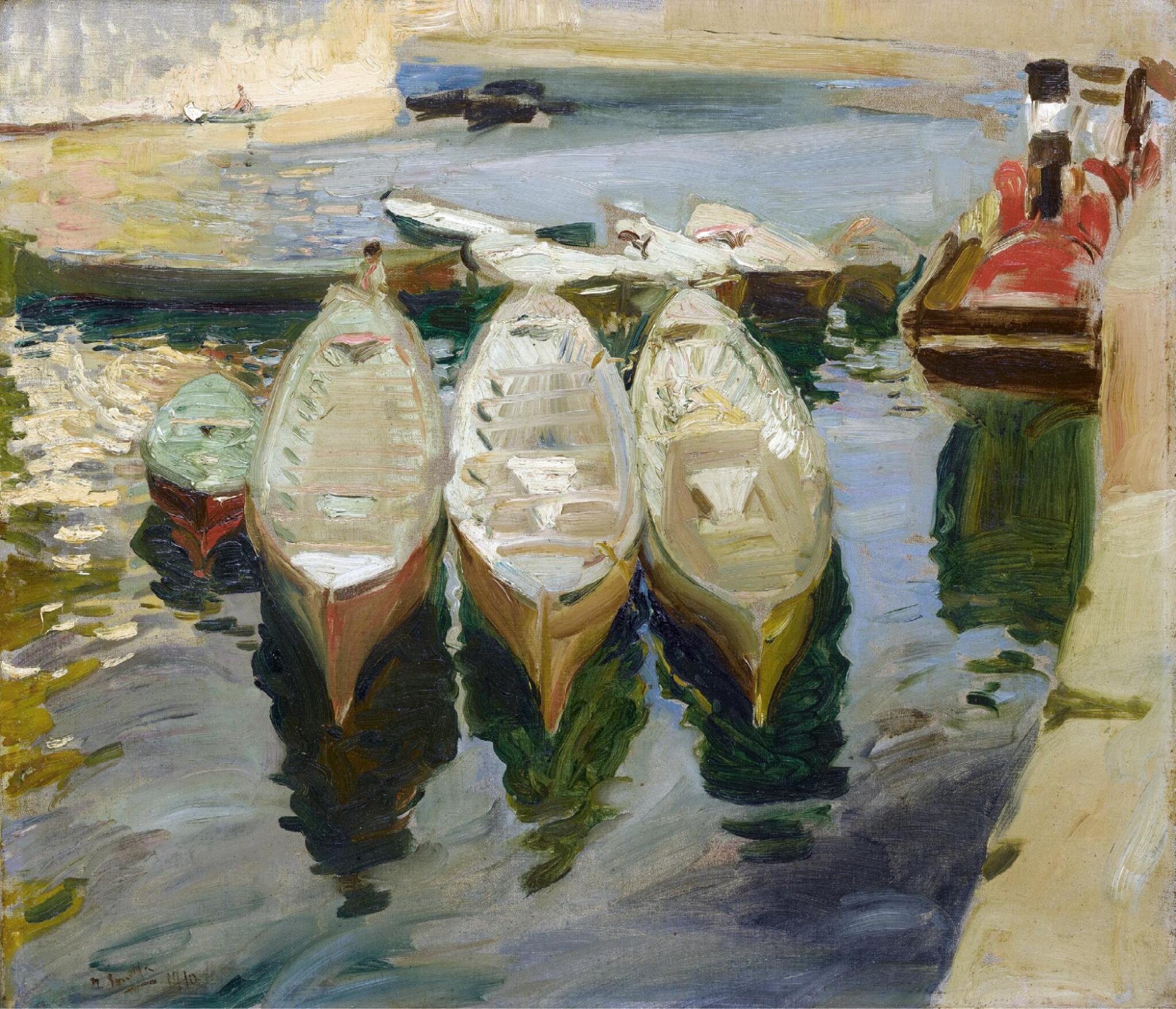 UNCONDITIONAL AND WITHOUT PREJUDICE

The canvas is wax lined with an aluminium sheet interleaf and is securely attached to what appears to be the artist's original keyed wooden stretcher. This is providing an even stable structural support.

The paint surface has an even varnish layer.

There are scattered networks of slightly raised lines of craquelure, most notably within the pale green paint of the small boat towards the centre of the left edge.

1) a spot between the boats in the centre left of the composition,

Private collection; thence by descent to the present owner

'Since I've never lived in a port, the spectacle seduces me, the sirens, the noise of loading and unloading continues, and the lights are still reflected on the sea...It's a pity to live in Madrid, it would be so beautiful to be well installed near the port!'

Sorolla in a letter to his wife dated November 1907

1910 was an extremely busy year for Sorolla. After the success of his first American tour in 1909 with exhibitions of nearly 400 works in New York, Buffalo and Boston, Sorolla was preparing to exhibit in Chicago and St Louis in 1911. At the same time, his work was being shown at the International Exhibition of Fine Arts in Santiago, the International Exhibition of Modern Artists organised by the Carnegie Institute of Pittsburgh, the XXI Witcomb Gallery exhibition in Buenos Aires, as well as an exhibition organised by the city council of Barcelona. Internationally acclaimed, Sorolla was at the apex of his career.

Sorolla took a long trip to Andalusia with his family at the start of 1910 where his primary focus were the gardens of Seville, different areas of Granada and the beach of Málaga. After Andalusia, he also visited Avila and Burgos. During this time, he was conscious of over working and he apologised to his wife ‘for these crazy artistic ways that in reality, mean nothing’ (2 April 1910, Burgos).

At the start of summer, Sorolla moved his family into the hotel La Perla de Zarauz, near San Sebastián. He chose this area because of proximity to the elegant seaside resort of San Sebastián, frequented by a wealthy clientele. Zarauz was a much more quiet town than busy San Sebastián and Biarritz, and this gave Sorolla more artistic freedom whilst still allowing him to make short trips to the nearby Guetaria, Pasajes and San Sebastián.

Painted during this summer, Puerto de Guetaria depicts boats in the port from an elevated perspective giving a quasi-bird´s eye view of the scene. This maximises the appearance of the shadows projected from the boats and the reflections of the light on the water. For Sorolla, depicting the sea and the reflections on its surface was a continuous challenge. In most of Sorolla´s paintings of the port of Valencia, the viewer´s gaze would be drawn to the boats, however, in Puerto de Guetaria, the main focus is on the water’s surface which here seems like liquid silver. Sorolla’s depictions of boats in ports were heavily inspired by Hokusai’s woodcut prints which Sorolla avidly collected.