PROPERTY FROM A SWISS PRIVATE COLLECTION 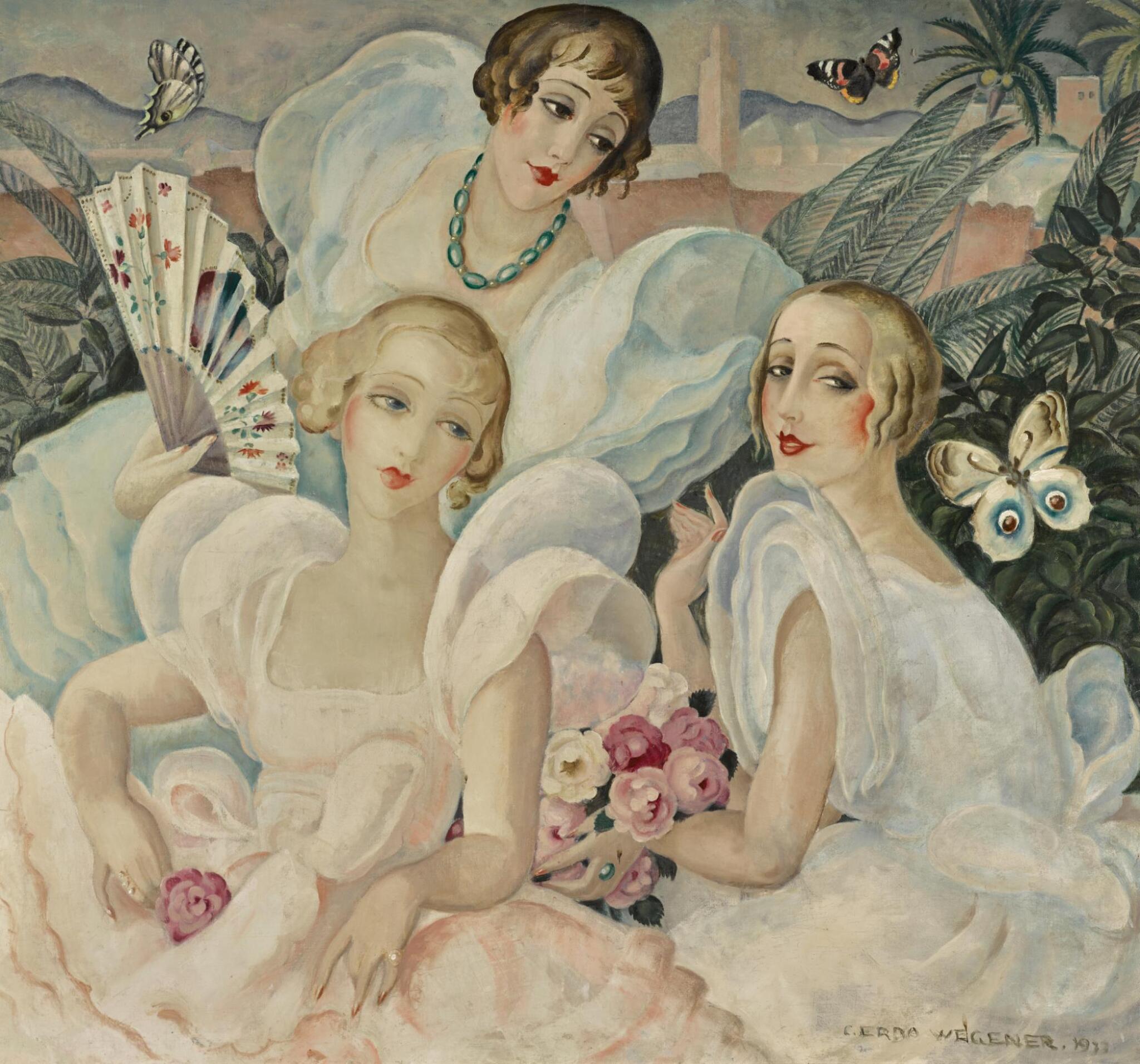 PROPERTY FROM A SWISS PRIVATE COLLECTION

The canvas has been relined and is securely attached to a keyed wooden stretcher.

The paint surface appears to be stable and well preserved. One minor, superficial scratch is visible in the lower right corner.

- some areas in the background along the upper framing edge, possibly addressing thinness to the paint;

- some small strokes in the face and cleavage of the woman to the left.

It should be noted that these retouchings are not clearly visible to the naked eye and that this picture presents very well. Overall, this work is in good condition and is ready to hang.

Private collection (purchased at the above sale)

Gerda Wegener, née Gottlieb, was a Danish illustrator and painter, famous for her images of fashionable women and femmes fatales in the style of art nouveau and later art deco. Her first husband Einar Wegener identified as female and became her favourite model under the name Lili Elbe, undergoing sex reassignment surgery, from which she died.

Gerda’s career as an artist began after graduating from the Academy in 1907 and 1908 when she won a drawing contest put on by the Politiken newspaper. She was inspired by fashion, and worked as an illustrator for Vogue, La Vie Parisienne and other magazines. She became a well-known artist in Paris, but was less successful in Denmark, where people found her work controversial. In 1925, she won a prize at the 1925 World’s Fair in Paris. She was known for her illustrations created for advertisements and was also a sought-after portrait painter.

Gerda met fellow artist Lili Elbe – then known as Einar Wegener – at art school. They married in 1904, when she was 18 and her spouse 22. They travelled through Italy and France, eventually settling in Paris in 1912. The couple immersed themselves in the Bohemian lifestyle of the time, befriending many artists, dancers and other figures from the artistic world, often attending carnivals and other public festivals. During this time Lili began to dress as a woman, and as she adopted her female name and persona, Gerda commonly introduced her as Einar Wegener's cousin. Lili died in 1931 from complications of the surgery.

Devastated by Lili's death, Gerda married Italian officer, aviator, and diplomat Major Fernando Porta, who was ten years her junior, and moved with him to Marrakech. Here she continued to paint, including the present work with Marrakech as its backdrop. She divorced Porta in 1936 after a rocky marriage, and she returned to Denmark in 1938.

Over the years, the story of Gerda and Lili gained a cult following in Denmark and around the world. Gerda Wegener's art was the subject of a recent retrospective at the Arken Museum of Modern Art in 2016-17. The Danish Girl, David Ebershoff's 2000 novel about them was an international bestseller and was translated into a dozen languages. Gerda is portrayed by Swedish actress Alicia Vikander in the 2015 film The Danish Girl, also starring British actor Eddie Redmayne as Lili Elbe.