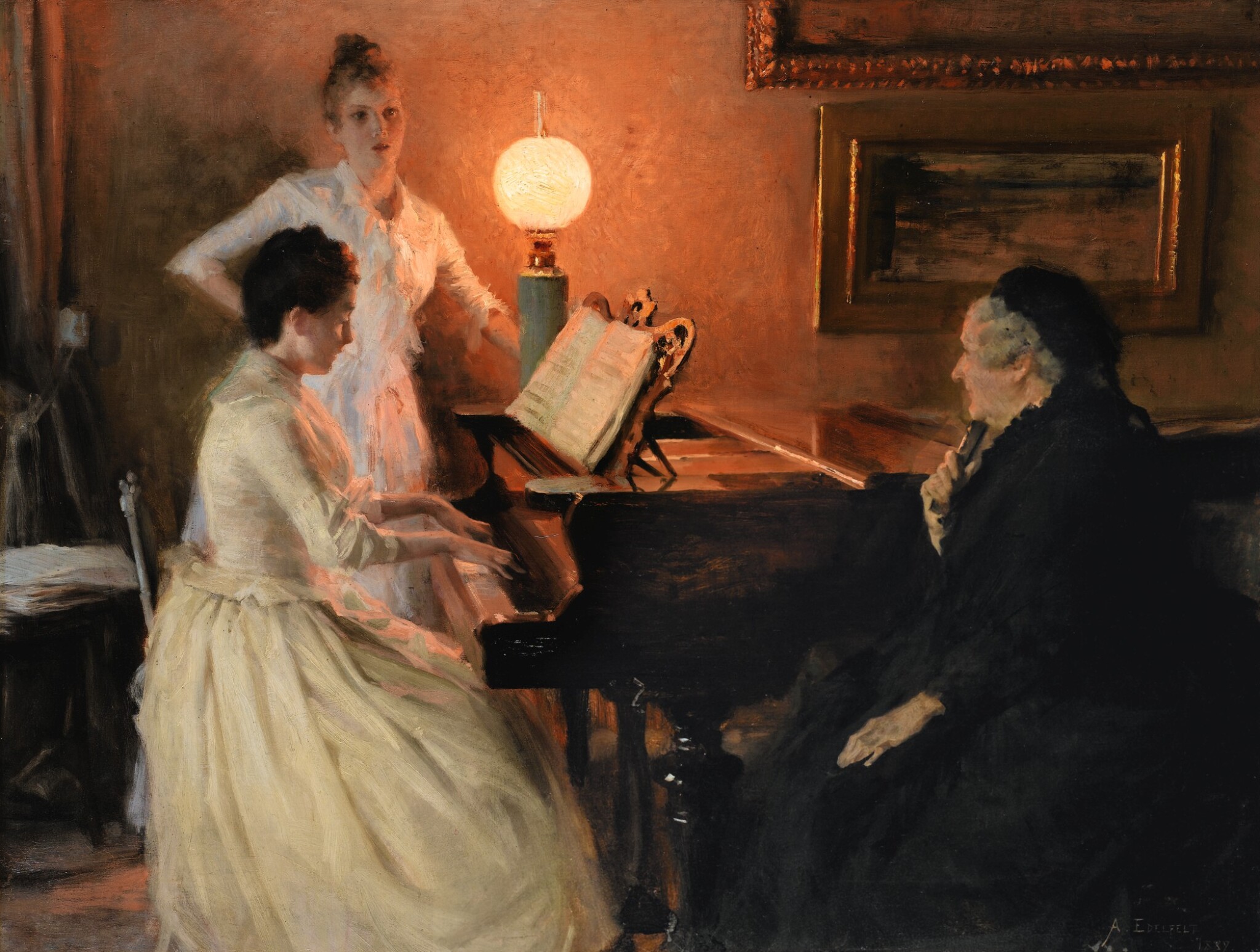 The canvas is unlined. There are some very minor localised lines of craquelure visible under close inspection, including in the upper picture hanging on the wall, and towards the lower-left corner of the composition. Ultra-violet light reveals a few very minor spots of retouching, primarily to the lower left of the signature, and in the woman's black dress. The painting is in good condition, clean and ready to hang.

Presented in a period gilt frame, with a nameplate.

Colours: in the original the colours are subtler, and less black than in the catalogue illustration, especially the woman's dress and side of the piano.

Acquired by the family of the present owner circa 1900; thence by descent

Evocative in its depiction of light and atmosphere, Au Piano depicts close members of the artist's family one evening in the Edelfelts' home at Gumtäckt (or Kumpula) Manor in Helsinki. The sitters are some of those closest to the artist: standing, his wife Ellen sings, while his sister Annie accompanies her on the piano, and to the right family friend Adelaide Gadd listens with a benevolent smile.

The genesis of this painting dates back to the previous summer, when Edelfelt was working in Haiko. From this came a related composition depicting the artist's sisters in an interior with summer verdure beyond (see studies in Ateneum, Helsinki, and the National Museum in Stockholm). Here the scene is a winter interior, bathed in the oil lantern's warm glow. With a fluid, painterly technique reminisicent of John Singer Sargent or Anders Zorn, Edelfelt depicts warm light playing across every surface: from Ellen and Annie's sumptuous dresses, the polished wood of the grand piano, to highlights on the ornaments of the gilt frames. While the scene has a timeless quality, the sense of contented ease and harmony doubtless comes from recent developments in the artist's life. He had recently married his childhood friend Ellen de la Chapelle earlier in 1888, whereupon Edelfelt's patron Herman Standertskjöld-Nordenstam (who had commissioned the artist's famous Luxembourg Gardens, Paris (1887, Ateneum, Helsinki)) offered the family the use of Gumtäckt Manor. It was there that the Edelfelts' only child, Erik, was born in November 1888. The Manor was later sold to the City of Helsinki in 1893, and now houses Helsinki University's Geological museum, and is surrounded by a botanical garden.

This painting was one of ten works shown by Edelfelt at the Paris Exposition Universelle in 1889, the last time it is known to have been exhibited in public. Other leading Finnish artists exhibiting included Akseli Gallen-Kallela (four works), Eero Järnefelt (two works) and Helene Schjerfbeck (one work, The Convalescent).

A smaller version of this work depicting the left half of the composition only, and measuring 41 by 36.5cm, was sold at auction in June 2000 (see Hintze no. 493).

The present work was photographed by the Norwegian-born, Helsinki-based photographer Daniel Nyblin (1856-1923).

We are grateful to Marina Catani for her assistance in cataloguing this work.