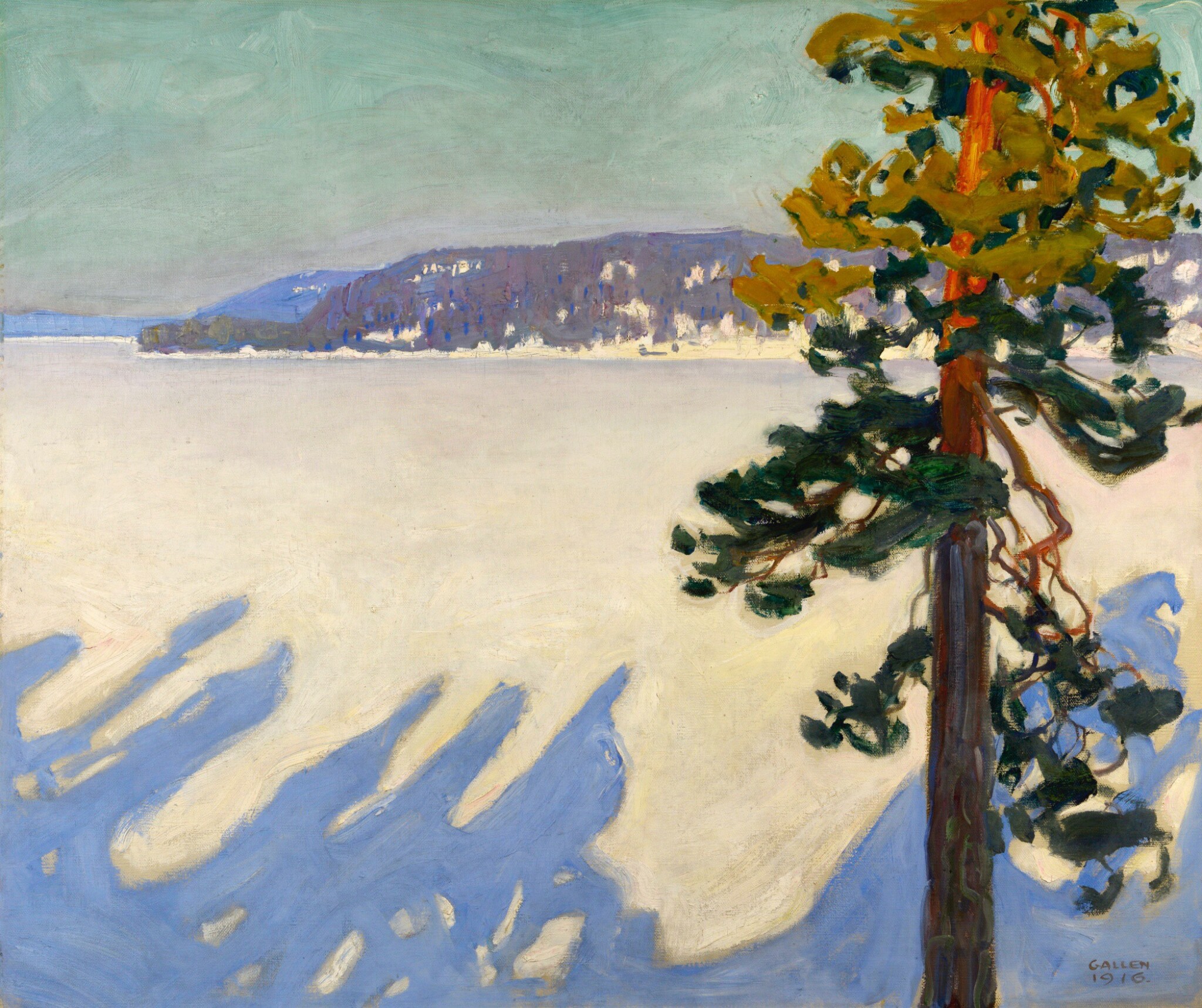 This painting is in very good, virtually original condition and ready to hang.

The canvas is unlined. There are some localised areas of craquelure, such as vertical lines to the left of the distant shore, however these appear to be stable. There is a very small loss, barely visible, in the sky in the upper centre. The artist's impasto, which is quite thick in some parts, is well preserved.

Under ultra-violet light the artist's pigments fluoresce (typical for the artist); there is a cluster of small spots of fluorescence in the left of the sky which may correspond to retouching, however there do not appear to be any other notable signs.

Please note the correct measurements for this work are 102 by 119.5cm., 40 by 47in. and not as stated in the printed catalogue. Please note this work will be available for collection at New Bond Street after the sale.

Private collection, Finland (acquired from the artist, presumably via the above); thence by descent

'The return to Kalela! ... It is so unbelievably quiet here that I can hear the pine needles fall from the trees and the tick of the clock's pendulum from the atelier all the way down to the waterfront cliffs around which the perches for the dinner soup swim in sepia-coloured water. I would not have believed that this entire unique fairytale land has existed and has been waiting for us for 15 years!'

Painted in the artist's vibrant later style, this large format composition is a rediscovery. A pure landscape, the work powerfully conveys the enduring inspiration Gallen-Kallela took from nature, and his profound respect for Finland's wilderness. And yet the scene's sense of tranquility and timelessness belies the turmoil in which Finland was embroiled in these years. In August 1915 the artist and his family fled their home at Tarvaspää outside Helsinki, having settled there only two years before. At that time the Russian Army was increasingly imposing itself in and around Helsinki, as it sought to quell the public unrest which would later lead to Finnish independence in December 1917.

Gallen-Kallela painted the present work from the environs of his wilderness studio Kalela, a place that held a special significance for him and to which he had only just returned after some fifteen years of absence. He had constructed it in 1894-95 on a rocky promontory overlooking Lake Ruovesi. Inspired by the massive farm houses of Karelia that he had visited on his honeymoon, he incorporated into its design many of the ancient motifs that he had found. It was at Kalela that his wife gave birth to their children Kirsti (1896) and Jorma (1898). And it was there that he worked on some of his most important projects.

In these years the artist was at the height of his international fame. In 1914 Gallen-Kallela exhibited his work in a dedicated room at the Venice Biennale, which led to the commission for a self-portrait for the Uffizi Gallery, and in 1915 he showed at the Panama Pacific International Exhibition in San Francisco.

Another smaller, undated version of this composition measuring 45 by 60cm, was recently sold at auction in Tampere.

We are grateful to Aivi Gallen-Kallela-Sirén for her assistance in cataloguing this work. The authenticity of this work has also been confirmed by the Finnish National Gallery following first-hand inspection and analysis on 25 October 2019.