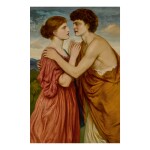 Lined. The surface presents well. There are a few isolated pin dots of accretion. A horizontal stretcher bar mark is visible across the width of the painting underneath the male figure's elbow; and there is faint craquelure visible between the figure's profiles. Under UV: there are scattered, small dashes of retouching visible on and in between the figure's heads, with some old inpainting to address prior craquelure is visible on the woman's neck. There are small areas inpainting on the man's proper left wrist and upper arm, the woman's proper right arm, and woman's skirt at lower left; and at center to address the aforementioned stretcher bar mark. Finely applied dots of retouching are visible on the figures' costumes.

Simeon Solomon, an English painter of Jewish descent who associated with the Pre-Raphaelites, found inspiration for his oeuvre in mythology and the classical world. Damon and Aglae is charged with emotion between two lovers, but the narrative is not explicit and the names of the figures, though inspired from Antiquity, do not point to a clear story. The background is indistinct and fades away in contrast to the intense red and orange of the lovers’ costumes, placing the focus on their embrace and the tension in this moment.

When Damon and Aglae was exhibited at the Royal Academy in 1866, it was accompanied by a poem by the controversial lyric poet and Aesthete Algernon Charles Swinburne. The poem, entitled Erotion, spoke of the transience of human love and was partially published in the Royal Academy exhibition catalogue alongside the painting:

'Sweet for a little even to fear, and sweet,

love, to lay down fear at love’s fair feet;

shall not some fiery memory of his breath

Lie sweet on lips that touch the lips of death?

Yet leave me not; yet, if thou wilt, be free;

Love me not more, but love my love of thee.

Love where thou wilt, and live thy life; and I,

One thing I can, and one love cannot—die.'