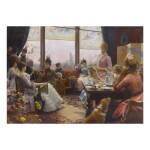 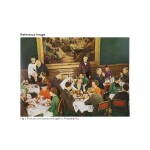 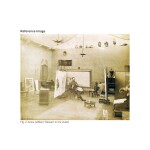 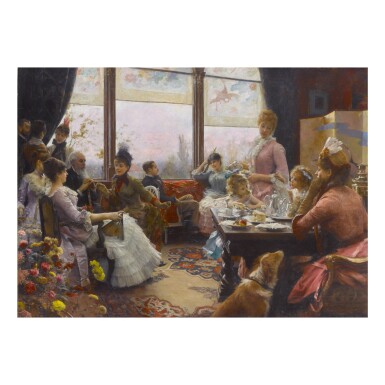 Known throughout his career as the “Parisian from Philadelphia,” Julius LeBlanc Stewart was part of a glittering social circle of expatriates, business moguls, aristocrats, artists and actors. Stewart’s exquisite renderings of bourgeois life in modern Paris often included an international coterie of friends, among them actresses Sarah Bernhardt and Lillie Langtry, Anthony J. Drexel, founder of Drexel, Morgan and Company (later J.P. Morgan) in New York, and James Gordon Bennett, the eccentric founder of The New York Herald and later the International Herald Tribune. These portraits of important society figures secured him fame and support, with Drexel and Bennett acting as two of his biggest patrons. In his complex multi-figural compositions, Stewart was expanding upon a genre already established during the Belle Époque by his contemporary and friend Jean Béraud. In the catalogue for the 1976 exhibition American Expatriate Painters of the Late Nineteenth Century, Michael Quick appreciates the similarities in the oeuvres of the two artists but goes on to note how “critics recognized the contribution Stewart was making to the form [of Jean Béraud], pointing out his increased vivacity and realism, which they regarded as particularly American traits” (Quick, p. 135).

The setting of Five O’Clock Tea is a sumptuous drawing room in a private home. The space is complete with an eclectic collection of furnishings and decorations, all of which demonstrate the owner’s exquisite taste in exotic objects and the vogue for japonisme during the Aesthetic Movement of the late-nineteenth century. The composition includes a fashionable Japanese screen and a Russian-style samovar, a beautifully carved table with barley twist legs, white-painted Louis XIV style chairs, and the unusual painted Japanese-style window shades. The subtle beauty of the late afternoon light passing through these delicate rice paper shades is a testament to Stewart’s masterful technique and his keen eye for every detail, from a button on a gentleman’s suit to a deeply colored jewel in a woman’s ring. Among fashionably dressed guests engaged in lighthearted, leisurely conversation over their tea service are two recognizable portraits: the artist has painted himself at far left, and his collie Jinny is depicted at right, eagerly awaiting the lucky drop of a crumb. Though they may have been recognizable in Stewart’s day, the identities of the other members of the party are unknown today. However, in Art and Artists of our Time, Clarence Cook suggested that the stylish guests are American (Hiesinger, p. 37).

As soon as it debuted in the 1884 Salon, Five O’Clock Tea was a critical success in both France and the United States. One American critic reported that “J.L. Stewart’s Five O’Clock Tea […] was much praised.” He continued, “It represents a fashionably dressed company of ladies and gentlemen, chatting and sipping tea. The figures are gracefully posed…rendered with delicate beauty of color and pleasing effect of light” (Reed, p. 90). In the autumn following its Salon exhibition, the work traveled to New York and was displayed at Reichard’s Gallery. This Parisian scene resonated with New York audiences, as another American critic observed, “the fashionably dressed women in the company suggest that it is a scene in the life of the American colony. A charming hostess in a pink gown is standing up in the middle of the group, and two pretty little children are helping themselves to bon-bons from the table at her side…. The picture is full of life and is thoroughly well-painted” (The Art Interchange, p. 149). After the success of Five O’Clock Tea, Stewart went on to produce more large-scale, multi-figural paintings bound for the Salon that advertised his aptitude and ambition for creating works with meticulous detail and skill, the latest fashions and lavish interiors. The following year he completed The Hunt Ball (Private Collection), one of his most famous compositions. The six-foot canvas, depicting an extravagant ball at a hunt club, features close to forty figures, many of them recognizable Paris socialites, including the Comte de Mornay, nephew of Emperor Napoleon III, Vicomte de Jange, and Baron Rothschild.

The earliest known owner of Five O’Clock Tea was Kugler’s Restaurant in Philadelphia, Stewart’s hometown. At the turn of the century, Kugler’s was a destination for fine dining, specializing in Philadelphia cuisine and advertised as “famous from coast to coast” (fig. 1). Even in the twentieth century, stylish diners in Philadelphia saw themselves mirrored in this timeless masterpiece, a showcase of Belle Époque elegance and refinement.