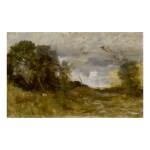 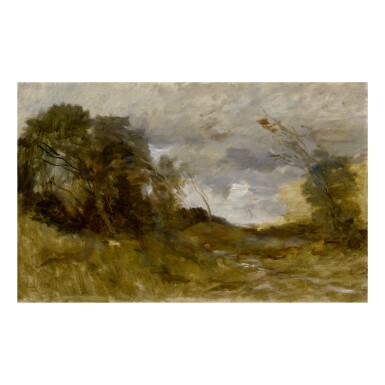 Collection of John M. and Elly B. Beard

Collection of John M. and Elly B. Beard

Galerie Durand-Ruel, Paris, no. 1245 (acquired at the above sale)

Painted circa 1870-74, Vallée solitaire is representative of Jean-Baptiste-Camille Corot’s artistic ingenuity and painterly freedom. A drawing in paint, the loose gestural brushwork borders on abstraction. The work is a showcase of the artist’s confident inventiveness, with the broadly scumbled plane of grass punctuated by long wisps of branches dragged through the sky.

In the last fifteen years of his life, Corot experienced a renewal of critical appreciation for his work. Collectors and dealers eagerly sought out his canvases, and throughout the 1860s and 1870s he was readily included in the Paris Salon, either because he was on the jury himself, or automatically admitted hors concours (a departure from his difficulties in the 1840s and 1850s). In 1877 the French Art critic Charles Blanc remembered that Corot “was loved like a comrade and respected like a master” (as quoted in Gary Tinterow, Michael Pantazzi, Vincent Pomarède, Corot, exh. cat., New York, 1996, p. 259). Seeking his instruction and approval was a younger generation of painters including Berthe Morisot and Camille Pissarro, identified as a pupil of Corot in Salon brochures as a sign of respect, while Claude Monet, Pierre-Auguste Renoir and Alfred Sisley each experimented with the artist’s techniques in the 1860s. In 1897, Monet wrote “There is only one master here—Corot. We are nothing compared to him, nothing” (as quoted in Tinterow, et. al., p. xiv).