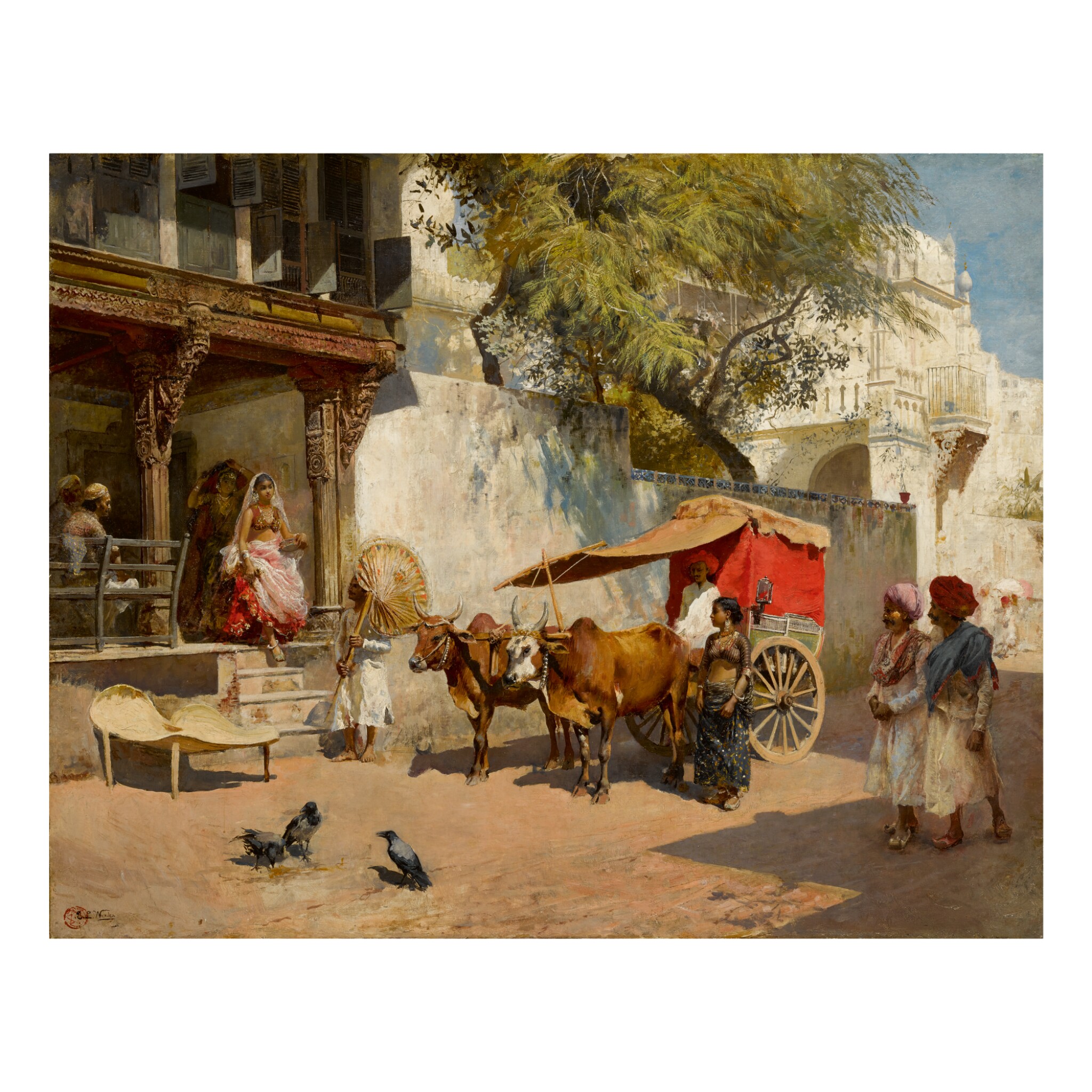 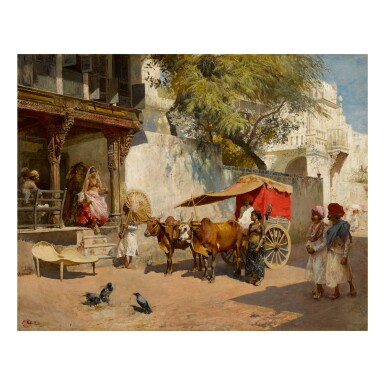 We would like to thank Dr. Ellen K. Morris for kindly confirming the authenticity of this lot, which will be included in her forthcoming catalogue raisonné on Edwin Lord Weeks. A Letter of Authentication from Dr. Morris accompanies this painting.

The following condition report was kindly provided by Simon Parkes Art Conservation, Inc.: This work has been restored and should be hung in its current state. It is painted on a fairly heavy piece of canvas that is unlined. The paint layer is clean and varnished. The paint layer reads quite erratically under ultraviolet light. There are retouches in the sky in the upper right and in a few spots at the top of the white building in the upper right. There is a small restoration at the base of the largest tree trunk, and a couple of retouches in front of the seated male figure on the far left. There are a few other retouches in the elaborate brick work framing the doorways on the left side.

The brilliant color of this sun-filled street scene, Nautch Girls and Bullock Gharry, Ahmedabad (Gujarat State, India), is emblematic of Edwin Lord Week’s best works of the mid-1880s. It may have been painted in situ, but its size and detail suggest that it was likely executed in Weeks’ Paris studio shortly after his second expedition to India in 1885-86 and based on sketches and studies prepared while he was in India. Both the Nautch girls, who performed music and danced, and their bullock cart, or "gharry," were favorite subjects of the artist.

The carved wooden shopfronts from which the red and white costumed Nautch girl is descending, holding a musical instrument, with another in the shadows behind her, suggest the architecture prevalent in Ahmedabad, a large city within the tropical southcentral Indian state of Gujarat. The standing chaperone in black silk awaits the arrival of the other Nautch girls at the gharry, with two admiring male passersby in the right foreground. It is typical of the esteem of Nautch girls that a white-robed figure with an umbrella awaits at the bottom of the steps to escort them into the gharry, which will likely take them to the palace on the far right. Also typical of Weeks’ penchant for realistic street life is the gathering of three ravens in the foreground. The success of the painting is echoed by Weeks in his unusual Moghul "star-in-circle" signature (below his name), which appears in a number of his paintings of India during the 1880s.

Weeks was one of the most important American Orientalist painters of the late nineteenth century and, unlike many of his peers, his work reflects his travels to the regions he depicted. In 1892, Weeks traveled overland from Turkey to India by way of Persia and published a travel account in serial format for Harper’s Bazaar magazine, titled From the Black Sea through Persia and India, which earned him fame and widespread artistic recognition in Europe and America. As Gerald M. Ackerman writes: "His ability to draw ethnic types without condescension or caricature, his skill in putting together grand compositions, his ability to tell convincing tales – all these skills make his paintings compelling. His wonderful eye for architecture, not just for its stylistic niceties, but also for its presence in sunlight, transmits a view of the past that has to be accepted as true" (Ackerman, American Orientalists, Paris, 1994, p. 244).