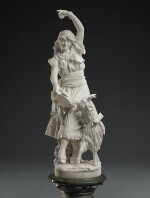 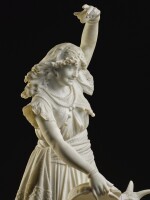 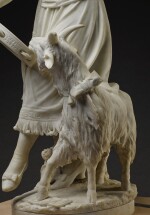 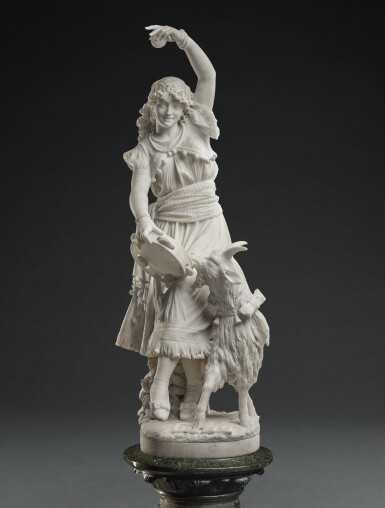 ESMERALDA DANCING WITH A TAMBOURINE

signed: P: Bazzanti / Florence and with letters to the front: FEBO

Overall the condition of the marble is excellent with minor dirt and wear to the surface consistent with age. One of the proper left fingers is reattached with original pieces. Minor abrasions to the drapery at the back and very minor chips to the edges of the integral base. Possible small loss to the tip of the goat's tail. General wear to the serpentine base.

Esmeralda is the protagonist in Victor Hugo's iconic novel The Hunchback of Nôtre Dame. She first appears as an orphaned Gypsy girl who captures the hearts of a number of male characters in the novel. The Archdeacon Claude Frollo sends his henchman, the 'hunchback' Quasimodo to capture Esmeralda, but is thwarted by the Captain of the King's Archers, the handsome Phoebus, who saves the heroine. Quasimodo is taken prisoner, flogged and subjected to public humiliation at which point he almost dies of thirst but is saved by Esmeralda who takes him water to drink. Esmeralda later falls in love with Phoebus but they are discovered by Frollo, who stabs the young Archer. In a horrible twist, Esmeralda is accused of Phoebus' murder and is sentenced to death. As she approaches the gallows, however, Quasimodo, who fell in love with her when she gave him water, swings down from a bell rope and rescues her, taking her to Nôtre Dame where he claims Sanctuary on her behalf. However, the Parlement votes to remove Esmeralda's rights of Sanctuary and she is eventually given up to the King's guards by the evil Frollo who cackles as she hangs from the gallows. Quasimodo goes to her grave and hugs her lifeless body, himself dying from starvation. The present, beautifully carved, marble shows Esmeralda with her trusty goat companion Djali. Djali is known for his clever tricks, so much so that he is accused of being the Devil in animal form. In the present group he can be seen spelling out the name of Esmeralda's lover, Phoebus (or Febo), using cards. Bazzanti was one of the leading workshops in Florence in the 19th century. Numerous important sculptors worked under their name, carving marbles including charming genre subjects, like the present group.