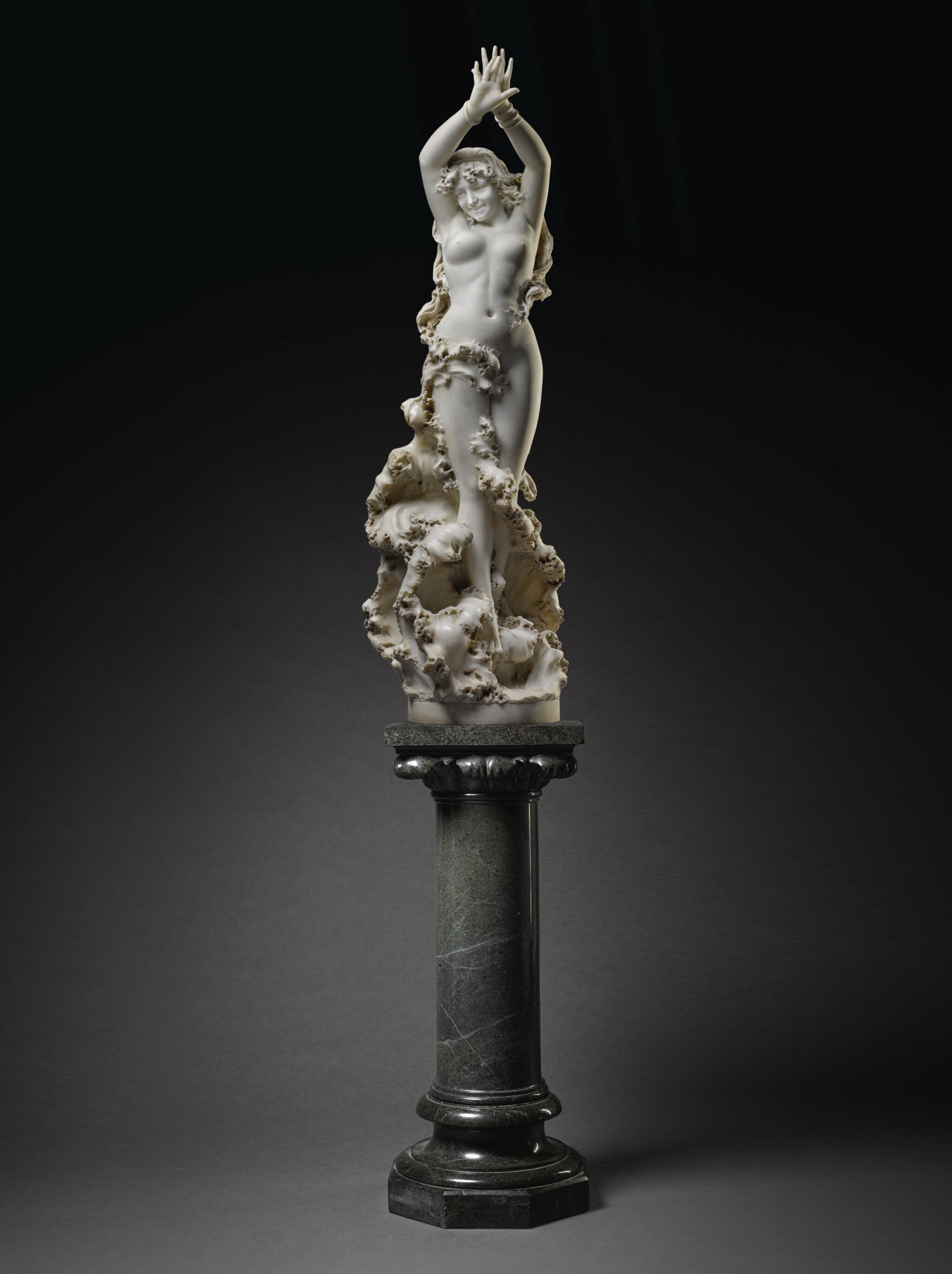 Overall the condition of the marble is excellent with minor dirt and wear to the surface consistent with age. The proper left index finger is reattached with original pieces. There is natural veining to the marble consistent with the material, including at the proper left hip. There are some very minor naturally occurring inclusions in the marble, including at the chest, chin and to one tooth. There are some small chips around the bottom edge. There is a little bit of dirt in the waves and hair. There is general wear to the column which is probably associated.

This magnificent sculpture of a Sea Nymph is a tour de force of marble carving. The sheer virtuosity of the carving of the waves which crash and foam against the Nymph's legs is breathtaking. The sculptor, Professor Fortunato Galli, has depicted a sea nymph rising from the waves, her hands outstretched, and her hair enveloping her upper body. The marble is a testament to the ability of late 19th-century carvers to create statuary of such realism and intricacy as has rarely been seen in other periods of sculpture. The present Sea Nymph falls into a tradition of Italian sculpture which arguably emerges out of the mid-19th century verismo sculpture movement. Its chief quality is realism created by the perfect delineation of surface detail, combined with narrative and compositional drama. Such sculpture owes a debt to the technical brilliance of Bernini's celebrated assistant Giuliano Finelli (1601-1653) who was responsible for the intricate roots and tendrils in his master's Apollo and Daphne in the Galleria Borghese. In the 19th century, marbles in this tradition captured the imagination of visitors to world fairs who were entranced by the technical skill on view. A prime example of this was Chioma di Berenice by Ambrogio Borghi, who, like Galli, was a native of Milan. Chioma di Berenice, which makes an interesting parallel to the present figure (and may well have been a source or inspiration for it) in featuring an idealised woman with arms and hands raised outstretched, caused a sensation when it was exhibited at the Paris Exposition Universelle of 1878, with one critic describing it as 'a prodigy'. The present Sea Nymph must be viewed in the context of the late 19th-century sculpture exemplified by the artists working for Pietro Bazzanti, who established one of the most successful commercial sculpture galleries in Florence, which still exists today in its prestigious location next to the Palazzo Corsini overlooking the Arno. Along with Galli, these sculptors include some of the most famous names of sculpture from this period: Cesare Lapini, Ferdinando Vichi and Emanuele Caroni. These sculptors produced works under the banner and authority of Bazzanti. However, as has been noted by Sandra Berresford, the gallery allowed their most established sculptors to sign in their own names, and not merely with the Bazzanti label, presumably both as a sign of their importance and also because this would have appealed to collectors. The present marble, which is one of the most signficant sculptures by Galli to have been offered on the international art market, is a prime example of such a sculpture: signed by Galli, it is also inscribed for Bazzanti who would have retailed it with pride and likely sold it to one of the many wealthy foreign collectors who visited Florence during this time.