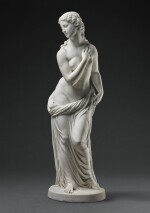 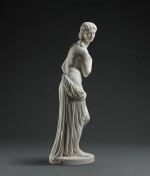 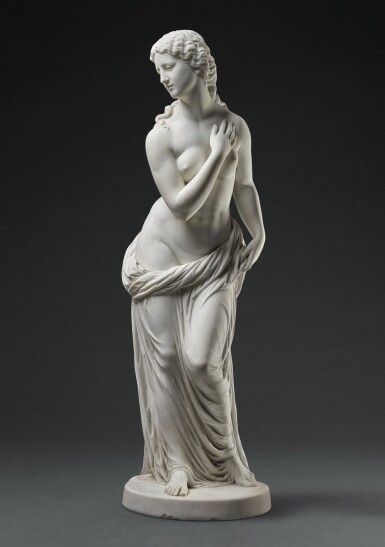 CARL CAUER | NYMPH AFTER THE BATH

CARL CAUER | NYMPH AFTER THE BATH

NYMPH AFTER THE BATH

Overall the condition of the marble is very good with minor dirt and wear to the surface consistent with age. There is natural veining to the marble consistent with the material, in particular a slightly orange vein across the proper right side of the upper back (this is integral to the marble and the cataloguer's view is that it is attractive). There is also a very slightly visible vein on the proper left side of the face by the ear. There are some minor naturally occurring inclusions in the marble, in particular around the proper right eye. Related to this, there is a probably original marble plug in what was probably a natural inclusion above the proper right eye at the hairline. There are minor chips and abrasions, in particular around the bottom edge and to some of the high points of the drapery at the back at the bottom. There are a few minor splashes of paint and dirt marks including to the proper left knee. There are a few slightly visible yellow marks in the base between the feet.

(Possibly) commissioned by Mr Schulze, London, in or before 1869;

This serene, life-size marble Nymph is an important rediscovery from the oeuvre of the classically-trained German sculptor, Carl Cauer. It almost certainly represents the Nymph after the Bath - sometimes erroneously referred to as Venus - listed in Masa's monograph (op. cit.), which was conceived before 1869. Dated 1870, the present statue may be the marble version commissioned by a Mr Schulze in London (Die Dioskuren, vol. 14, 1869, p. 266), which may or may not be identical with the marble exhibited in Berlin in 1872 (Die Dioskuren, vol. 17, 1872, p. 383). The soft, idealised facial features and clinging drapery with narrow folds exhibited in the present marble compare closely to other female figures Cauer created around 1870 (see Masa, op. cit., pp. 102-103). The eldest son of Emil Cauer the Elder (1800-1867), founder of the famous German dynasty of sculptors, Carl Cauer received his initial training in his father's studio in Kreuznach before spending time in Paris and later Berlin, where he entered the workshop of Christian Daniel Rauch. Drawn to idealised representations in the classical style, Cauer spent time in London in the early 1850s and would later return to exhibit at the Royal Academy in 1869 and 1870. It was in Rome, however, that the sculptor finally settled and occupied a studio together with his brother, Robert, at the same time as running the workshop in Kreuznach, where he returned to live permanently in 1881. The present marble is the most significant work by Cauer to come to the market in recent memory.