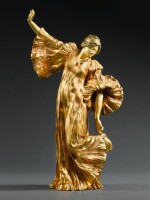 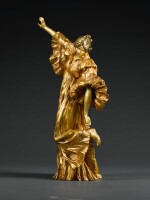 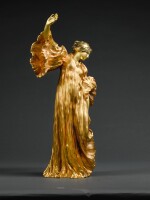 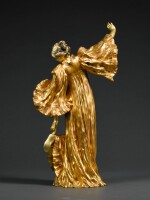 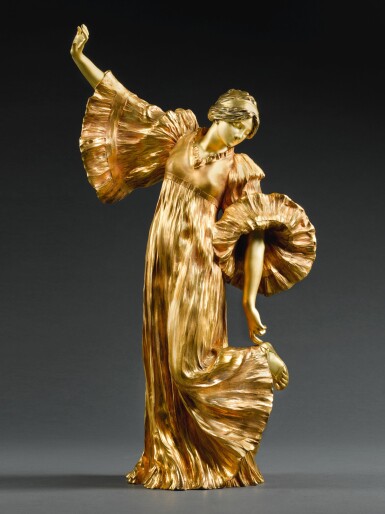 Overall the condition of the bronze is very good, with minor dirt and wear to the surface consistent with age. There are some minor spots of greening and tarnishing to the patina, notably to the proper right sleeve. There are a few very minor areas of scratching, including at the chest and above the proper right eye (this may be a small hairline fissure). The gilt patina has pink highlights in the dress and dark undertones in the hair. There is some slight staining to the proper right side of the face.

This finely chased figure in an elaborately draped dress is part of a series of dancers, the Jeu de l'Écharpe, conceived by Agathon Léonard, which was first exhibited at the Société Nationale des Beaux Art in 1897 as a project for a theatre foyer. The dancers in elegant poses are all characterised by their delicate gestures, loose dresses and wide sleeves. They rapidly became Léonard's most popular works, and were produced in gilt bronze by the Susse foundry.

Agathon Léonard, born to Belgian parents as Léonard Agathon van Weydeveldt, studied in his hometown Lille under Delaplanche before settling in Paris, first exhibiting at the Salon there in 1868. He had a successful career, exhibiting regularly in Paris until 1914 and serving as part of the jury for the Société Nationale des Beaux-Arts. He became particularly known for his small subjects representative of the Art Nouveau. His most successful works, the various figures of the Jeu de l'Écharpe, were not only offered to the Empress of Russia as a table centrepiece, but also became bestselling figurines in porcelain, cast by the Sèvres factory.