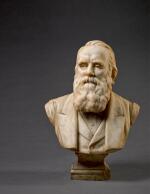 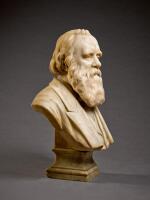 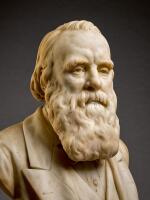 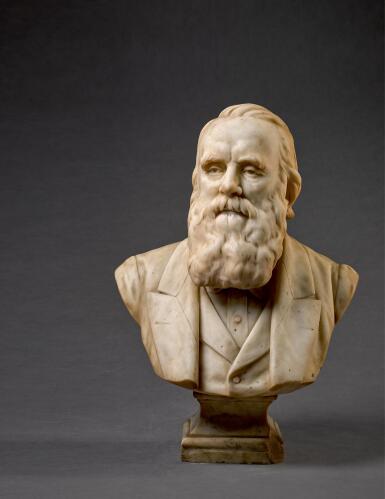 The proposed identification as Darwin is a theory and it is very possible that the sitter could be another unidentified person. Overall the condition of the marble is good with minor dirt and wear to the surface consistent with age. The marble is very dirty and has a yellowish patina; it would benefit from cleaning by a professional conservator. There are naturally occurring inclusions in the marble throughout, which have dirt which makes them more prominent. There are various chips to the edges and corners of the socle and a larger loss at the front right corner. There are abrasions to the edges of the bust.

Boehm is generally considered one of the more colourful British sculptors of the last quarter of the 19th century, although he was born in Vienna, the son of a distinguished Hungarian medal engraver, and only settled in England at the age of 28 in 1862. After studying in his native city he travelled to Italy and spent three years in Paris. He brought to England a more spontaneous and theatrical approach to modelling which contrasted with the prevailing somewhat dry late neo-classical style, and found a particularly receptive audience amongst clients interested in aristocratic portraiture (both human and equestrian). Queen Victoria provided royal approval with three commissions in 1869, after which he was appointed sculpture tutor to Princess Louise, became the first Sculptor in Ordinary, and was made a baronet in 1889.

The present bust compares in many aspects to the marble seated figure of Darwin at the Natural History Museum in London (Stocker op. cit. fig. 270). The beard and costume are nearly identical, and the deep-set eyes and bushy eyebrows also compare. The hair of the sitter is, however, different on the present bust, which makes the identification uncertain - the NHM statue shows Darwin as a bald man, whereas the present bust has a full head of hair. This could possibly be explained by the sitter having worn a toupee.