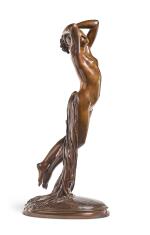 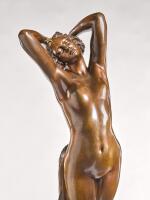 UNE HEURE DE LA NUIT (AN HOUR OF THE NIGHT)

Overall the condition of the bronze is good, with minor wear and dirt to the

surface consistent with age. There is minor dark spotting to the bronze throughout and a few small spots of greening in areas. There is a scratch at the proper right shoulder. There are a few further more minor scratches. The gilt star is slightly loose and could be a later replacement.

Please note that the image for this lot is incorrectly labelled as lot 27 in the printed catalogue.

Joseph Pollet was born in Palermo, Italy but practised and exhibited in Paris, earning the prestigious Legion d’honneur for his work in 1856. His subjects ranged broadly from the historical, ecclesiastical, classical, and allegorical.

The present model gained Pollet wide recognition when he exhibited it in plaster in the Paris Salon in 1848. While it was on display he was quickly approached for the rights to edit it, and both Empress Eugenie and the Ministry of the Interior requested a version of it. Since this exhibition, the composition has been reproduced in several sizes and in different materials. A marble version of Une Heure de la Nuit was exhibited at the Louvre and is now in the Museum of the Second Empire at Chateau de Compiègne – a French royal residence built for Louis XV and restored by Napoleon. Other examples of Pollet’s work can be found in the collections of the Musée de Grenoble and the Musée d’Orsay.