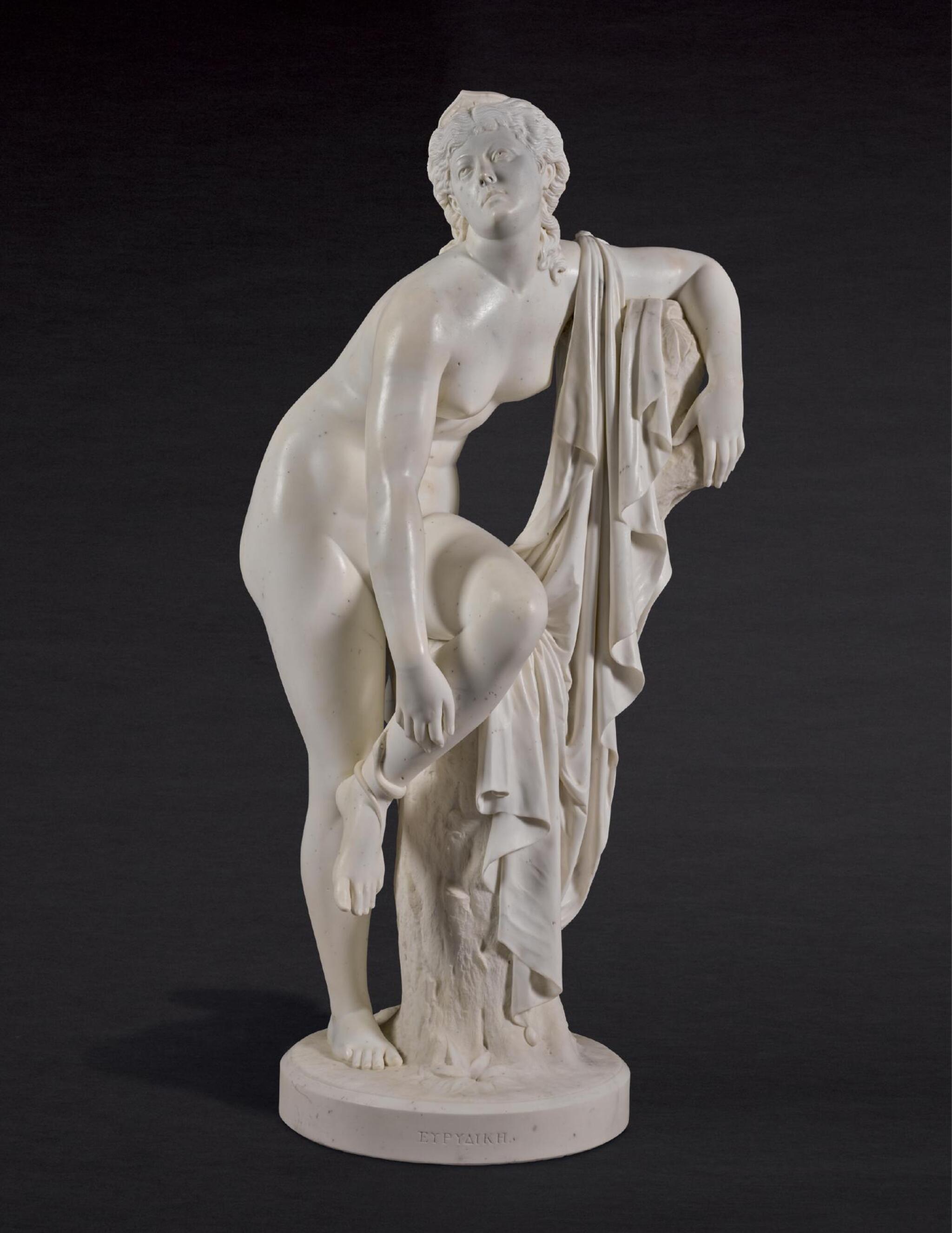 The marble is overall all in good condition consistent with recent cleaning. There are restorations to the end of the nose and to the right arm at the top of the bicep, elbow, wrist and around the thumb. There are numerous natural inclusions many of the larger ones filled.

This impressive marble figure of Eurydice is a rare large reduction of the monumental original, which has been on loan to the Victoria and Albert Museum. Boehm's original marble was presented to the Bristol Art Gallery at the end of the 19th century by the heirs of John Fuller but sold in 1959. Conceived around 1875, it appears to be Boehm's earliest known mythological subject. Stocker (op. cit., p. 282) notes that, though the Eurydice's pose is inspired by classical models such as the antique Laocoon group and Giambologna's Venus, her distinctly Victorian face is 'pure Boehm'. Eurydice was followed by the Galatea of 1877, and the Nymph of 1878.

In Greek mythology, the nymph Eurydice was the wife of Orpheus. Eurydice died suddenly after being bitten by a viper and descended into the Underworld. Orpheus followed her there and, using his music-making skills, pleaded with the god Hades to let his wife return with him. Hades granted his request, but with the condition that Orpheus must not look back at Eurydice during their ascent. Tragically, just as they were about to reach the safety of daylight, Orpheus turned to gaze at his wife, and she was lost to him forever. Boehm's marble shows Eurydice in the unwitting moment before her death, with a serpent twisted around her ankle.

Boehm is generally considered one of the more colourful British sculptors of the last quarter of the 19th century, although he was born in Vienna, the son of a distinguished Hungarian medal engraver, and only settled in England at the age of 28 in 1862. After studying in his native city he travelled to Italy and spent three years in Paris. He brought to England a more spontaneous and theatrical approach to modelling which contrasted with the prevailing somewhat dry late neo-classical style, and found a particularly receptive audience amongst clients interested in aristocratic portraiture (both human and equestrian). Queen Victoria provided royal approval with three commissions in 1869, after which he was appointed sculpture tutor to Princess Louise, became the first Sculptor in Ordinary, and was made a baronet in 1889.