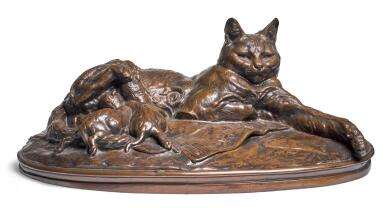 Overall the condition of the bronze is very good, with minor dirt and wear to the surface consistent with age. There are a few small nicks and scratches, notably one to the mother cat's proper right hind leg.

Chatte et ses petits was Fremiet's first great sculptural coup. Fremiet exhibited it in plaster at the Paris Salon in 1849 at the age of twenty-five. It was greeted with great public acclaim. Coupled with the critical applause also came official state recognition when, on 6 October 1849, Fremiet was commissioned by the state to carve Chatte et ses petits in marble for the price of 2,000 francs. The marble version was exhibited at the Salon of 1850. The model continued to appear in exhibitions at a number of locations including Nantes, London, Vienna, Antwerp and Munich between 1861 and 1888.

The state commissioned marble was placed in the Tuileries apartments of General Valliant, Marshal of France and housekeeper to Napoleon III. Bartlett records a meeting between the sculptor and General Valliant one day when the General observed: 'O, I have one of your things, the cat and her young. It pleases my children, and they like to play with it'. The marble was last sold in these rooms on 11 July 2018 (lot 87).