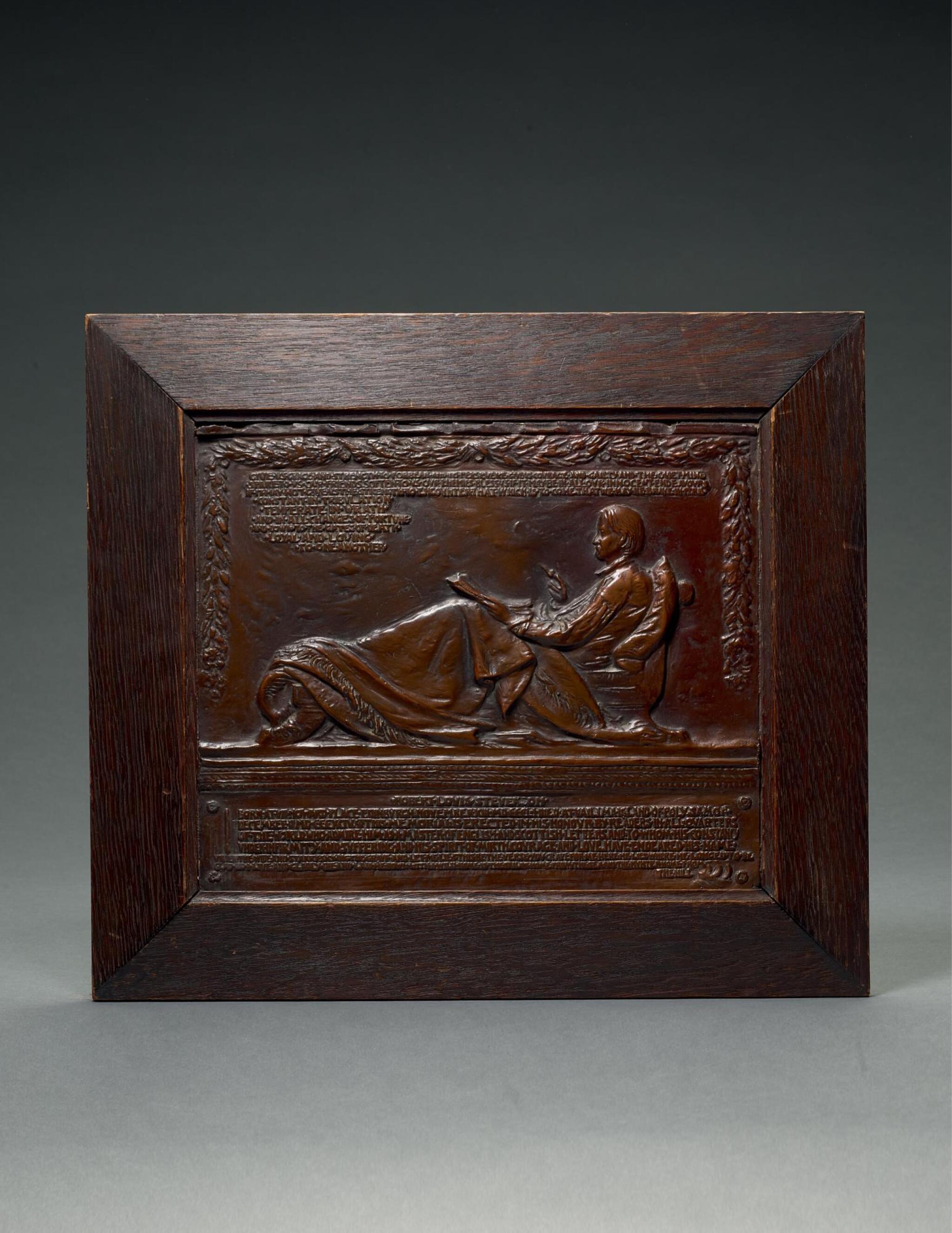 inscribed: ROBERT LOUIS STEVENSON and further inscribed with a dedication and a prayer

copper electrotype, in a wood frame

Overall the condition of the copper electrotype relief is very good with minor dirt and wear to the surface consistent with age. There are minor fissures around the edges, particularly along the upper edge. There are a few small scratches and nicks to the copper. There is general wear to the frame consistent with age, particularly at the edges and corners.

"In response to your inquiry, we are pleased to provide you with a general report of the condition of the property described above. Since we are not professional conservators or restorers, we urge you to consult with a restorer or conservator of your choice who will be better able to provide a detailed, professional report. Prospective buyers should inspect each lot to satisfy themselves as to condition and must understand that any statement made by Sotheby's

is merely a subjective, qualified opinion. Prospective buyers should also refer to any Important Notices regarding this sale, which are printed in the Sale Catalogue.

This rare copper electrotype is a reduction of the memorial to Robert Louis Stevenson modelled by Saint-Gaudens between 1899 and 1903 and unveiled in the Church of St Giles in Edinburgh in June 1904. Stevenson had sat for Saint-Gaudens when he had visited the United States in 1887, in New York and in Manasquan, New Jersey. The writer was suffering from tuberculosis and so he was depicted propped up in bed writing. Saint-Gaudens had been introduced to Stevenson's New Arabian Nights (1882) by his friend Will H. Low, who dedicated a poem to Stevenson, which Saint-Gaudens incorporated into the composition. Reductions were cast both in bronze and copper electrotype and the composition was converted by the artist into a circular version; see the bronze cast in the Metropolitan Museum of Art, New York (inv. no. 12.76.I). The St Giles memorial was initially cast by Barbédienne but the final version was cast by Gruet in Paris. The model differs from the earlier 1887-1888 portrait in that it features a more elaborate bed and the writer holds a pen rather than a cigarette. Although Dryfhout illustrates a bronze reduction, he does not mention the existence of a copper electrotype - though the use of this medium is consistent with Saint Gaudens, since the 1887-1888 model was made in copper from 1899 and again from 1902 (Dryfhout, 1982, op. cit., p. 173).