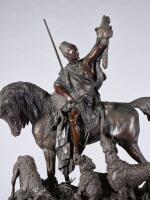 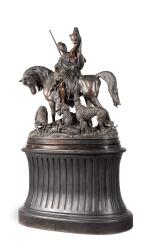 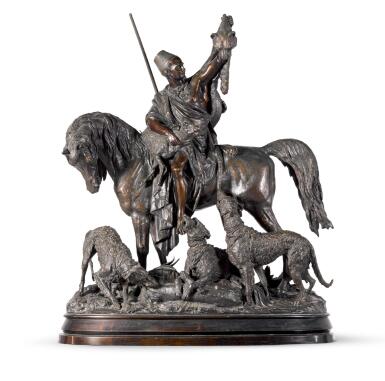 bronze, dark brown patina, on an ebonised wood base

Overall the condition of the bronze is very good with minor dirt and wear to the surface consistent with age. There are a number of original slightly visible casting joints including to the top of the man’s proper left arm and to his proper right leg. There are areas of wear to the patina particularly around the sides of the integral base. There is a patch of wear to the proper left shoulder. There is general wear and dirt to the fluted wood base. Stable splitting to the wood consistent with the material, chips and flaking of paint.

"In response to your inquiry, we are pleased to provide you with a general report of the condition of the property

described above. Since we are not professional conservators or restorers, we urge you to consult with a restorer or conservator of your choice who will be better able to provide a detailed, professional report. Prospective buyers should inspect each lot to satisfy themselves as to condition and must understand that any statement made by Sotheby's is merely a subjective, qualified opinion. Prospective buyers should also refer to any Important Notices regarding this sale, which are printed in the Sale Catalogue.

This noble and Romantic depiction of a Berber tribesman from the mountain regions of North Africa shows the subject returning to the village with his dogs and a rescued lamb, while in his outstretched hand he holds up the predator's hide. The present, magnificent, bronze is of the rare largest size of the model cast by Waagen.

Born in the Baltic port of Memel, East Prussia (now Klaipeda, Lithuania), Max Arthur Waagen was one of many German artists of Baltic extraction who left their homes to pursue careers abroad. Waagen moved to Paris, where he appears to have permanently settled, for his extant works bear exclusively French names and were cast there. The Livrets de Salon reveal that he exhibited at the Paris Salon between 1861 and 1887 and that his studio was located at Cours-de-Vincennes, 40 and later avenue Chevalier, 11. The Kabyle au retour de la chasse is the sculptor's defining model. Another cast of the model is in the Dahesh Museum, New York, whilst a cast with the same base as the present bronze is published by Payne (op. cit.). A cast is known to have been owned by the Rockefeller family; given the prestige of the current bronze, with its elaborate base, it is possible it could be identified as the Rockefeller cast.