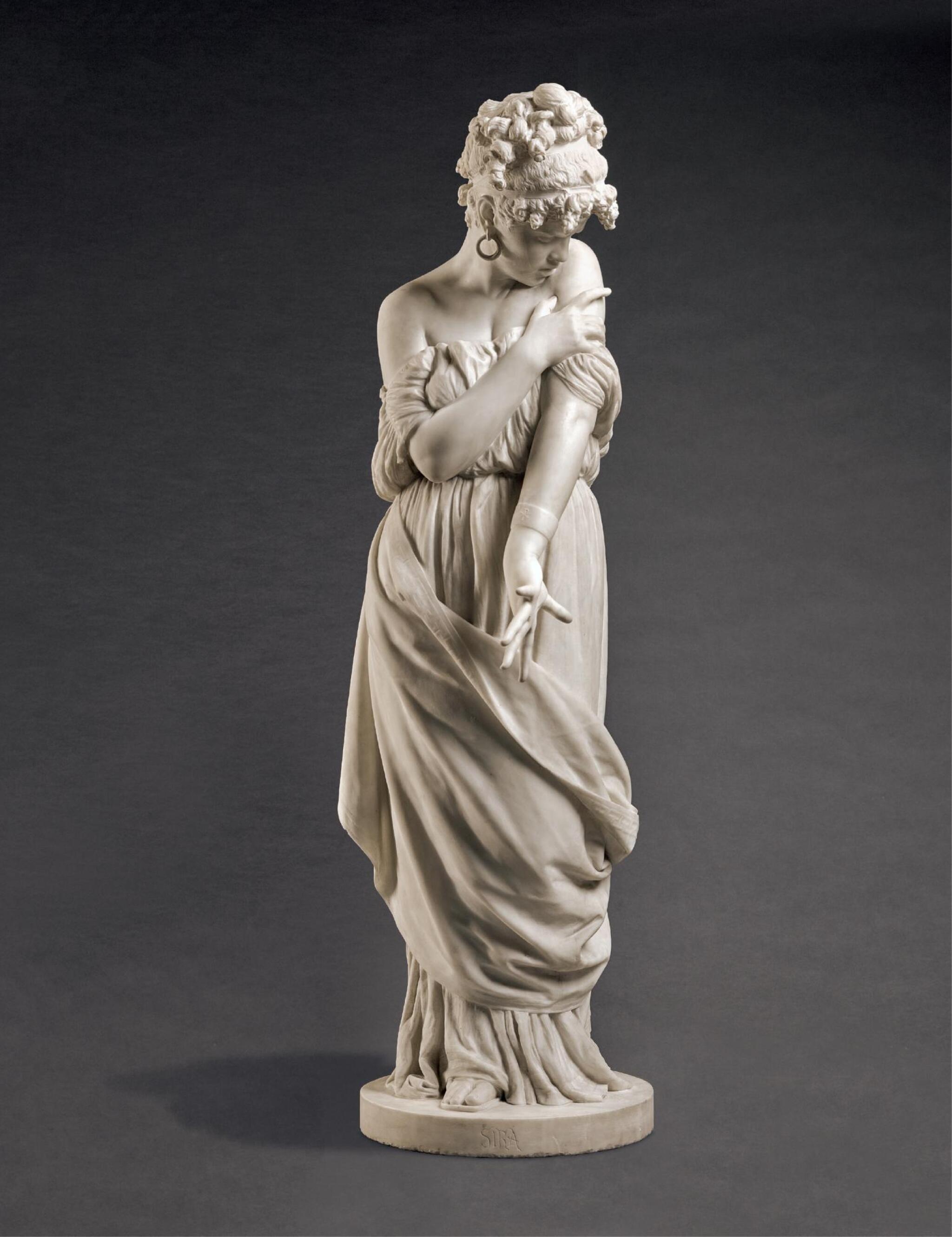 Overall the condition of the marble is very good with minor dirt and wear to the surface consistent with age. There is minor natural veining to the marble consistent with the material. The fingers of the proper left hand are restored (but not the thumb). The proper right earring is restored. There are a few minor chips and abrasions to the base and to the edges of the drapery at the base.

﻿In response to your inquiry, we are pleased to provide you with a general report of the condition of the property described above. Since we are not professional conservators or restorers, we urge you to consult with a restorer or conservator of your choice who will be better able to provide a detailed, professional report. Prospective buyers should inspect each lot to satisfy themselves as to condition and must understand that any statement made by Sotheby's is merely a subjective, qualified opinion. Prospective buyers should also refer to any Important Notices regarding this sale, which are printed in the Sale Catalogue.

This dramatic marble representing the fictional slave girl Syra is a rare work by the accomplished Italian sculptor, Alessandro Rondoni. The model, of which a life-size version is housed in the Galleria Nazionale d'Arte Moderna in Rome, is arguably Rondoni's masterpiece. It was first shown in Naples in 1877, before being exhibited in Turin and Rome in 1880, and finally, in 1888, in London. Its subject is inspired by the popular 1854 novel, Fabiola or, the Church of the Catacombs by the English Cardinal Nicholas Wiseman. Set in the 4th century AD, the novel's eponymous heroine is a beautiful and privileged Roman girl whose slave, Syra, is a secret Christian, at risk of being persecuted by the Emperor's regime. When, in a fit of rage, Fabiola strikes and wounds Syra, the slave girl's humble and loyal conduct is deeply impressed upon her Roman mistress, resulting in her eventual conversion to Christianity.

Fabiola clearly enjoyed great popularity in Italy, where it was adapted into a film in 1918. The character of Syra provided an opportunity for Rondoni to represent not only a dramatic moment, but an exotic, historicising figure, appealing to the Orientalist vogue of his time. Sira captures the girl in her distress at having been wounded, her brow furrowed and fingers splayed, with large hoop earrings and a shoulder-baring dress highlighting her Eastern otherness. Rondoni's remarkable skill is seen particularly in the girl's intricately carved, abundant locks of hair and complicated folds of drapery.