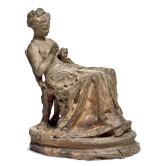 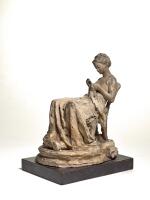 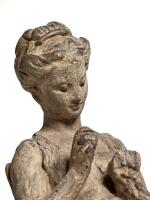 terracotta, on an ebonised wood base

There is dirt and wear to the terracotta consistent with age. There are some restored breaks: running across the front of the group through the base and bottom of the dress and footstool; and to the back of the group running through

the base and under the legs of the chair (perhaps also to the legs of the chair). These breaks are not visible but areas of restoration can be seen. The head is reattached and the joint is not visible to the naked eye. There are a few very minor areas where the restorations have flaked. There is general wear to the base. Otherwise the condition of the terracotta is good.

private collection, Europe, since the 1960s or earlier;

thence by inheritance to the present owner

This beautiful terracotta appears to be near-identical to the plaster sketch of La Brodeuse made for the 1870 Salon, now in the Musées des Beaux-Arts de la Ville de Paris (inv. no. PPS01271). This plaster was made in 1907 after a terracotta which belonged to Maurice Dreyfous. There is a tantalising possibility that the present terracotta could be that from the Dreyfous collection. Bronzes were cast from the plaster model by the Hébrard foundry.

La Brodeuse was the first fully fledged expression of Dalou's interest in simple, modern life and would define the stylistic and thematic direction of his work for a decade. The seated seamstress became the sculptor's first public success when a life-size plaster version was lauded by the critics at the 1870 Salon and was subsequently purchased by the state.

The composition is full of beautifully observed informal detail. Perhaps the most charming motif, as Hunisak noted, is the sense of tension created by the woman's hands, which implies a taut thread. Gautier, a contemporary critic, wrote that the Brodeuse possessed 'in the naiveté of her attitude, in the straightforwardness of her features, in the purity of her forms, a penetrating attractiveness.'