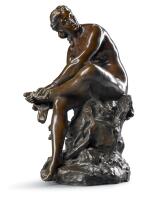 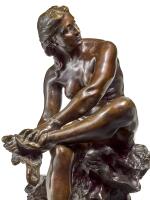 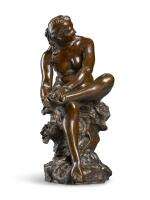 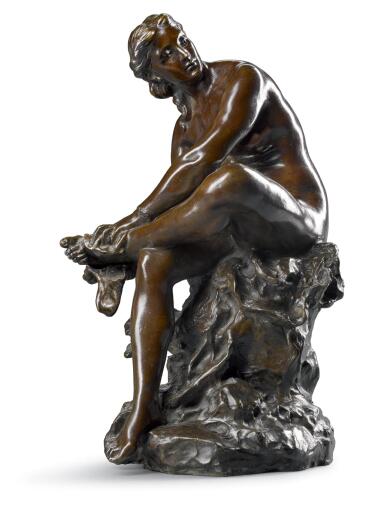 Overall the condition of the bronze is excellent with minor dirt and wear to the surface consistent with age. There are some minor areas of rubbing to the patina such as at the nose, toes and top of the head.

Dalou began modelling his nude studies in earnest during his exile in London from 1871 and probably continued until the 1890s. The nudes display a fascination with the subject. The sculptor worked and re-worked a series of models depicting nudes in guises typical of the genre, such as before and after the bath, towelling themselves, standing, bending down, or seated, taken by surprise or removing their stockings. These were more intimate sculptures than his studies of labourers and number among Dalou’s finest works. He chose to keep them private and they were never exhibited publicly at the Salon; they would be seen only in his studio or at private exhibitions. Despite this, they did not escape notice and his works of female nudes were well known, celebrated and collected during his lifetime.

A marble version of the present bronze was sold in these rooms on 12 July 2017, lot 63. The model of the present lot is relatively rare: the marble is the only one known at present, and the bronzes do not appear frequently - one sold at Sotheby's London on 21 April 2004, lot 130.