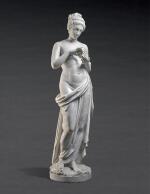 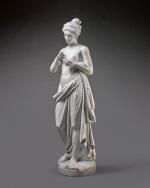 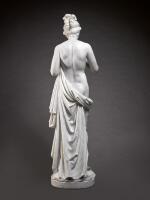 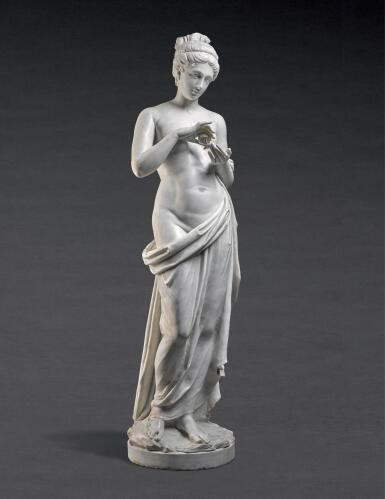 Private collection, a castle, Belgium, since before the 1950s

The story of Cupid and Psyche, originally from Apuleius' Metamorphoses or The Golden Ass, has been a well-loved iconography throughout the history of art. Famous depictions in art include the ancient Roman Cupid and Psyche in the Musei Capitolini, the fresco cycle by Raphael in the Villa Farnesina, and Antonio Canova's Psyche revived by Cupid's Kiss, in the Musée du Louvre. Often depicted with a butterfly as a symbol for the soul and of innocence, as on the present marble, sculptors frequently depicted Psyche herself with butterfly wings, to match the angelic ones of her lover Cupid.

At almost life-size, and with a smooth marble surface and air of Neoclassicism, the sculpture is certainly indebted to some of the masters of the late 18th and early 19th century. Compare, for example to Bertel Thorvaldsen's Psyche Holding the Flask for Venus, which shows Psyche in a similar pose and with a similar up-do as the present lot (Thorvaldsens Museum, inv. no. A821). However, the model for the present marble is clearly Antonio Canova's intimate group of Cupid and Psyche Standing (Louvre, inv. no. MR 1776): although lacking the figure of Cupid, the composition of Psyche is nearly identical. The present marble can be seen as an ode to Neoclassicism, and in particular to Antonio Canova.