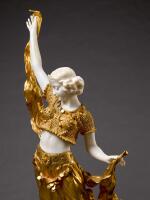 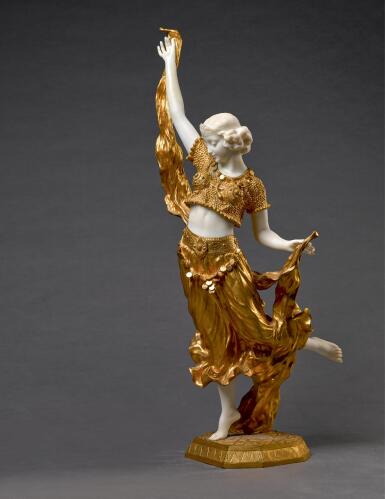 Overall the condition of the marble and gilt bronze is good with minor dirt and wear to the surface consistent with age. There is minor natural veining to the marble consistent with the material. There are a series of slightly visible restored fractures to the proper right arm. The proper right little finger is reattached. There is minor greening to the bronze in the crevices. There are a few original screws to hold the marble in place.

This lively dancer is the best-known of Affortunato Gori's figures. A practitioner of chryselephantine sculpture, Gori revelled in the contrasts of different materials, brought together to add vibrancy to his subject. Here the cool white marble of the girl's skin is set off against the glittering, fluttering drapery in gilt bronze. The vogue for Oriental Dancers was at its height in the first part of the 20th century. It has been suggested that Gori's figure may have been inspired by the internationally famous dancer Maud Allan in her role as Oscar Wilde's Salome, originally performed in 1906. The costume, which the dancer designed herself, is certainly closely comparable.

The Florentine Affortunato Gori was a pupil of Augusto Rivalta. Whilst few details of his life are known, his work appears to have had a wide following. He exhibited a number of times at the Paris Salon between 1904 to 1923.