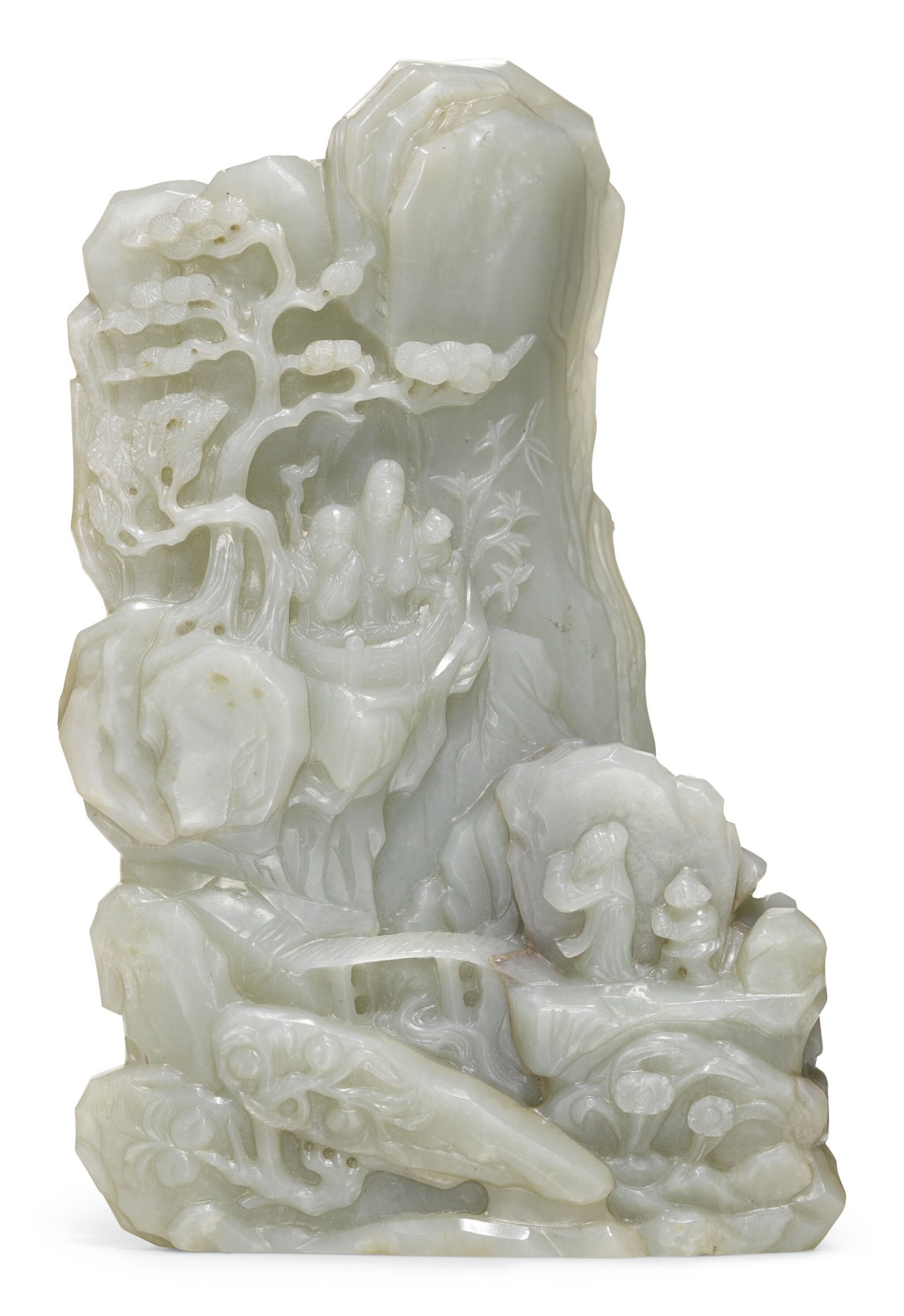 The front face deftly carved in various levels of relief depicting a figure and his attendant standing on a rocky ledge before a bridge, looking upward towards two immortals and an acolyte in a fenced garden, all set in a mountainous landscape with pine and peach trees, the reverse with two cranes sheltered under further trees, the stone of an even celadon tone.

Please note this lot will be available for collection after the sale from New Bond Street until 9th November 2018 only, thereafter it will be transferred to Greenford Park Warehouse and available to collect from 13th November onwards.

In general good condition with the exception of minor nibbles to the extremities particularly to the pine trees and to the base. There are some natural inclusions and fissure in the stone.

This carving cleverly captures an idealised landscape in miniature form, incorporating into the design the natural features of the stone. The visual vocabulary on which these miniature landscapes were based incorporated many features of the natural world. Moreover, the figures, birds and plants depicted pertained to a system of design sustained by a complex concept of the universe and its auspicious phenomena (see Jessica Rawson, ‘The Auspicious Universe’, China. The Three Emperors 1662-1795, London, 2005, pp 358-361). It is likely that the Islands of the Immortals in the Eastern Sea inspired the representation of numerous carved jade mountains such as the present example. It is during the reign of the Qianlong Emperor that the carving of jade boulders into three-dimensional miniature landscapes first appeared, and were produced in various shapes and sizes; see one in the National Palace Museum, Taipei, included in the Museum’s exhibition The Refined Taste of the Emperor: Special Exhibition of Archaic and Pictorial Jades of the Ch’ing Court, Taipei, 1997, cat. no. 40; another in the Palace Museum, Beijing, illustrated in The Complete Collection of Treasures of the Palace Museum. Jadeware (II), Beijing, 2008, pl. 53; and a third example sold in our Paris rooms, 12th December 2013, lot 100.