The Collection of Martha Hyder Online 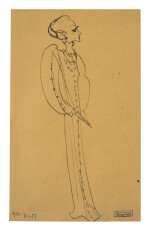 Pen and ink and brush and ink on paper

Margaret Bannerman (1896-1976) was a Canadian actress known for her work in the English films The Gay Lord Quex, Lady Audley's Secret and Hindle Wakes. She had a successful career on stage, appearing in revues and light comedy. In 1963, she appeared as Mrs. Higgins in the touring company of My Fair Lady.

Mrs. Vulpy was a role in the 1924 play The Watched Pot, with costumes designed by Cecil Beaton.

The second executed on cream wove paper on the title page of 'The Square Egg' by H.H. Munro. Excellent condition.

The Collection of Martha Hyder Online