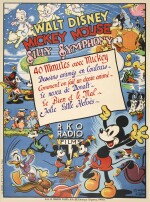 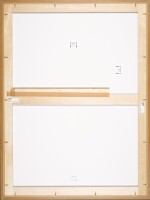 The Silly Symphonies were a series of seventy-five short animations produced by Walt Disney, which started in 1929 and ended in 1939. The Silly Symphonies were originally intended as animated accompaniments to music. The early animations were in black and white, and then went on to use the newly invented Technicolor. The series also introduced Donald Duck to the big screen in The Wise Little Hen in 1934. It was a very popular series, which went on to launch a Disney media franchise, including a newspaper comic strip and a number of children's books. This poster was purchased in 1995 and has been in a private collection since that time. This magical poster depicts many of the characters from Disney's Silly Symphony short cartoons, including several images of Mickey and Minnie, Donald Duck, Goofy, Three Little Pigs, Wynken, Blynken, and Nod, together with Max Hare.

In the 1930s it was usual for French cinemas to allocate a certain time for their features. This would enable them to choose a number of short films to be shown before the main feature. This is a stock poster, which enabled the individual cinemas to add their own text in the blank box in the middle of the piece, to advertise what would be shown. In the case of this particular poster the programme was forty minutes with Mickey, colour animation - how to make animated drawings, Donald's Nephew, The Good and the Bad and Pretty Little Elves.To-date this is believed to be the only known surviving example.

Please contact Sotheby's for a custom shipping quote for this lot.

Linen-backed and conservation framed with UV plexiglass. Excellent condition, with the colours remaining very bright. Minor restoration to the folds.