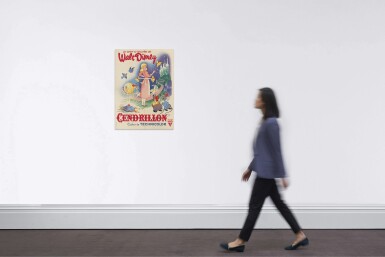 Walt Disney's fairy tale Cinderella was based on the 17th century story by the French author Charles Perrault. It is the twelfth Disney animated feature film. This was the first time that Disney's core animators (Disney's Nine Old Men) collaborated as directing animators. The film was a much needed commercial and critical success after the difficult times the studio had experienced during and after World War II. This film was the most financially successful for the studio since Disney's first feature Snow White and the Seven Dwarfs in 1937

To-date only a couple of examples of this exceptionally rare French poster have ever surfaced.