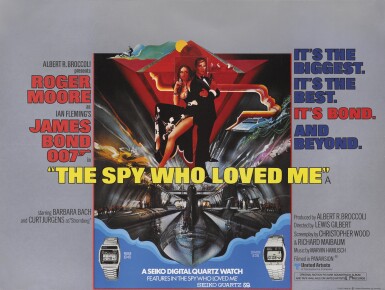 This was the tenth of the James Bond films, and the third starring Roger Moore. It was directed by Lewis Gilbert and also stars Barbara Bach and Curt Jürgens. It captured the imagination of everyone who saw it with Bond's famous Lotus Esprit that converts into a submarine.

This British poster was designed as a tie-in with Seiko. It features the Seiko 0674 wristwatch. In the film the watch is modified by Q to work like a pager, and had a built-in telex that allowed MI6 to send Bond messages that he was able to print out.