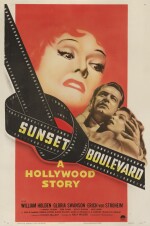 This American film noir was directed and co-written by Billy Wilder, and produced and co-written by Charles Brackett. The film stars William Holden, Gloria Swanson and Errich von Stroheim. The film was nominated for eleven Oscars and won three. Swanson's performance as the faded film star Norma Desmond is spellbinding. Although she was nominated for Best Actress at the Oscars, she lost out to Olivia de Havilland in The Heiress.

This magnificent poster is one of the most important in the film noir genre, and highly prized by collectors.